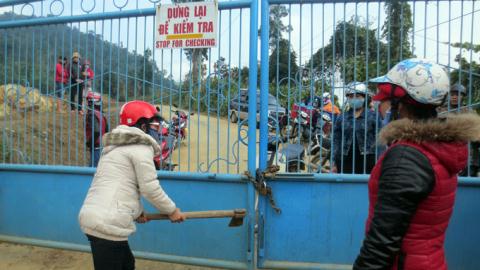 People try to unlock the door to enter the Phuoc Son Company’s office to ask for debt payments.

Tuoi Tre newspaper has reported that Austrian Harald Biebl, director of the HCM City-based Bach Hop Company, operational in Vietnam since 2005, has fled the country.

The Vietnamese partner of the company has also “vanished” since July, leaving unpaid social insurance premiums of VND586 million and VND310 million, equal to the combined June salary of hundreds of workers.

Bach Hop is not alone. Vietnam has to pay a heavy price for welcoming disreputable foreign investors. Many have left Vietnam quietly after making big money in Vietnam.

Only when local newspapers reported that the Quang Nam provincial Taxation Agency was demanding that the Phuoc Son and Bong Mieu Gold Mining Companies, both belonging to the Australian Besra Group, pay its tax arrears did people realize that the Australian gold miner had collected 7 tons of gold in Vietnam, but had refused to pay tax.

A report from the taxation agency showed that the two companies now owe VND297 billion in tax, while nine Vietnamese businesses have asked for the taxation agency’s intervention to force Besra to pay for products and services they provided to Besra in the past.

Metro Cash & Carry, a German retailer, repeatedly reported losses, and has not paid any dong in corporate income tax over the last 12 years of operation in Vietnam. Metro was recently sold to the BJC Group from Thailand for 655 million euros.

A report of the General Department of Taxation (GDT) showed that 720 out of 870 FIEs inspected by GDT in 2013 were found as evading tax or reporting losses to avoid tax, worth trillions of dong.

Also, according to the taxation body, FIEs declared a huge loss of VND68 trillion in 2013. Dr. Bui Ngoc Son from the Politics Research Institute said this has raised doubts that FIEs had conducted transfer pricing to evade tax.

Son commented that there are many reasons for Vietnam to think FIEs have conducted transfer pricing. Most of the FIEs repeatedly reporting losses have been steadily expanding their business in Vietnam.

The legal loopholes, plus mismanagement, both have helped the foreign companies to conduct transfer pricing.

A report submitted by the Dong Nai provincial Industrial Zone Board of Management to the Ministry of Planning and Investment showed that from 1995 to 2013, Nestle Vietnam took losses for 18 years and made profits for four years, with the total loss of up to $30.8 million, equal to 20 percent of the stockholder equity.

Coca-Cola, the giant soft drink manufacturer, has also reported a huge gross loss of $180 million over the last decade. Meanwhile, despite the big loss, it still plans to pour another $300 million into an expansion project in Vietnam.

Pham Chi Lan, a renowned economist, said it is now the right time for Vietnam to tighten control over FDI and FIEs, because even though Vietnam has offered many investment incentives to attract investors, it has been repaid with blows.