Once putting high hopes on the Vietnamese retail market, described as very promising with 90 million consumers, many retailers have had to leave the country.

Auchan Retail, the French supermarket chain, has announced a decision to sell 18 supermarkets in Vietnam. The market brought revenue of 45 million euros, or $50.4 million last year, and it has been incurring a loss. 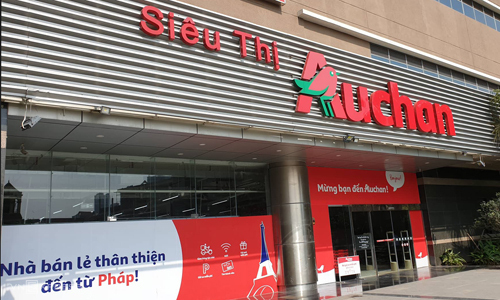 Auchan entered Vietnam in 2015 and now has 18 supermarkets in Hanoi, HCMC and Tay Ninh province. In its 2018 annual finance report, Vietnam was mentioned as one of the two markets which still could not bring a profit.

The leading retail chain in France said it still could not find a suitable business model for the market and has been incurring losses here.

A representative of Auchan has confirmed Auchan is negotiating with retailers in Vietnam on the sale of the 18 supermarkets. Once the sale is completed, it will officially leave.

Prior to that, Parkson announced the closure of one of the last Parkson stores in Vietnam. Belonging to Parkson Holdings Berhard (PHB), a subsidiary of Lion group, Parkson joined the Vietnamese market early in 2005, and became one of the first retail premises developers.

In the first years in Vietnam, the Malaysian retailer saw great potential here and drew up a very ambitious plan on expanding its business. However, it step by step lost the race for market share.

Since 2014, Parkson has stopped pouring money into its network in Vietnam. In the next years, it shut down department stores because of unsatisfactory business results.

Parkson’s report shows that its business in Vietnam was the worst among its Southeast Asian markets. The Malaysian retailer commented that the Vietnamese retail market is still challenging as more and more shopping malls appear.

Five years ago, Metro Cash & Carry, which was considered the biggest modern wholesale supermarket chains, was transferred to Thai TCC Group after many years of taking losses

Metro joined the Vietnamese market in 2002, when Vietnamese began getting used to the model. However, it had to leave after it developed 19 shopping centers in 14 cities/provinces, five transit storehouses, and employed 3,600 workers.

While the revenue was on the rise, the reported profit was poor. A report from the taxation agency released in 2013 showed that Metro Cash & Carry topped the list of unprofitable foreign-invested enterprises.

During the 12 years of operation in Vietnam, 2010 was the only year Metro Cash & Carry reported profit, VND116 billion. Meanwhile, it reported losses for the remaining years, from VND89 billion to VND160 billion.

Who is the most profitable retailer?