Local and foreign investment is being poured in greater volumes into Vietnam's education sector given the interest among Vietnamese people in quality education. 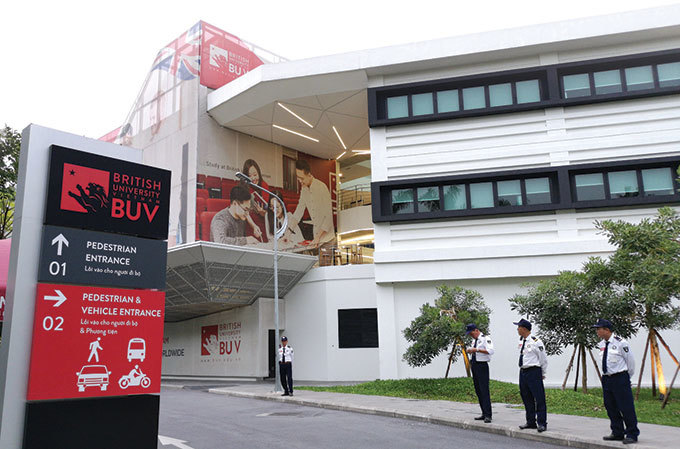 The International School @ ParkCity Hanoi (ISPH) will officially welcome hundreds of students to study at its new 2.5-ha facility in September.

“We are here in Hanoi to meet the educational needs of Hanoi residents, both Vietnamese and expats,” Mr. Pham Duc Trung Kien, a private equity investor and Board Member of ISPH, told VET.

“There are many great success stories in Vietnam’s education sector for both founders and investors. So I am upbeat about investing in the country.”

The school is the ParkCity Group’s second international school, after a sister school was opened in Kuala Lumpur, Malaysia, in 2011 and now has more than 1,100 students of 54 nationalities.

ISPH expects to see similar numbers and diversity, shaping the student population in a way that will give students the best possible education, including having classmates and friends from different countries, according to Mr. Kien.

“The latest decree, Decree No. 86, allowing an international school to have up to half of all students from Vietnamese families, was a major step in the right direction for foreign investors,” he added. “We welcome this policy change from the government.”

Many other international schools have made the most of the opportunity and increased Vietnamese enrolments since the Decree took effect last August, according to Mr. Troy Griffiths, Deputy Managing Director of Savills Vietnam.

With the growth of the economy, Vietnamese parents are willing to pay more for quality higher education.

The government is keen to attract more FDI and expand educational opportunities for its young people and this is part of the recent trend to encourage FDI and open up Vietnam’s economy to the world, according to Mr. Mark A. Ashwill, Managing Director of Capstone Vietnam, an educational consulting company.

“More Vietnamese middle-class families choose to send their children abroad to study in a quality environment, while the Decree will enable more children from well-to-do families in Vietnam to attend international schools, which will prepare them for their overseas studies,” he said.

In the seven years since the government issued Decree No. 73/2012 regulating foreign investment in education and now Decree No. 86, the number of FDI projects has grown more than five-fold, from 111 in 2012 to 497 as at August 20.

There are 28 preschool institutions, 29 that teach from preschool to high school, and five higher education institutions, together with some 300 schools providing training in informatics and foreign language skills.

According to Mr. Griffiths, it’s still too early to fully gauge the impact, even though foreign interest has grown significantly.

Of a similar mind, Mr. Sam Fraser, ISC Research Head of Asia Pacific Research, told VET that there is potential for partnership investments, particularly partnerships between local investors and independent school names from countries such as the US, the UK, Australia, and Canada.

Local and foreign experts commented that education offers long-term sustainable profits with high margins and fewer risks than other investment fields. This is also why investors keep pouring money into the sector, including domestic investors.

The schools were invested in by Mr. Nguyen Tuyen, an overseas Vietnamese investor and General Director of the Khai Sang JSC and a Co-founder of the Renaissance International School Saigon.

For its first year, the school has enrolled 1,000 students in classes from kindergarten to high school. EMASI, an acronym for English, Mathematics, Art, Science, and Information Technology, has affordable school fees.

Vingroup announced its entry into higher education last year with the establishment of the private, non-profit Vin University (VinUni). The new university is expected to be built in Hanoi and officially receive applications from students for the first course from 2020.

The bilingual model is popular for newly-established schools. “I think there is a growing need for affordable bilingual education in Vietnam,” Mr. Kien from ISPH said.

“That means a school will teach the standard national curriculum and add an integrated layer of English curriculum that has been approved by MoET, like Cambridge. In such a school, teaching costs will be less because the school does not need to have foreign teachers in all classrooms. We plan to establish a bilingual school such as this in Hanoi within a few years.”

Certain barriers remain, according to Mr. Griffiths, such as Decree No. 86 still requiring both a business eligibility license and an education operator’s license. Such procedures are different from other conditional investment fields in the country, where only business eligibility licenses are needed. In addition, the concept of legal entity has not been simplified by the Decree.

From an investor’s perspective, Mr. Kien said the government holds the philosophical view that Vietnamese children are vital assets of the country and are not just customers in the marketplace.

“There are separate laws and decrees and regulations governing educational activities. As a foreign investor, I had to spend countless hours learning about the legality of investing in the sector.” Mr. Ashwill agrees that foreign investors need to spend time on due diligence and not rush into any long-term investment decisions.

Mr. Fraser from ISC Research expects to see a number of new schools entering the market over the next few years, but investors will want to be sure of the correct path to take.

The type of school to open (such as bilingual, K-12, US, British, or IB orientation, etc.) will be important and the location will also be vital, with Hanoi, Da Nang, and Ho Chi Minh City all major cities to consider.

“The prospects look good in Vietnam as long as investors take time to understand the market and the feasibility of operating in the country,” he said.

“Economic forecasts show continued growth and a greater level of FDI is therefore anticipated. Decree No. 86 provides potential for investment, especially given that an increase in the number of foreign workers in Vietnam is likely.” VN Economic Times