Vietnam's exports to US soar, but risks exist

With a growth rate of 34 percent, or $10.9 billion, Vietnam has jumped from 12th to 7th among the leading suppliers to the US market.

Bloomberg had previously predicted that if Vietnam can maintain the current growth rate for the whole year, Vietnam would leave Italy, France, the UK and India far behind to become the seventh biggest exporter of the US. Vietnam’s total export value to the US may reach $69 billion. 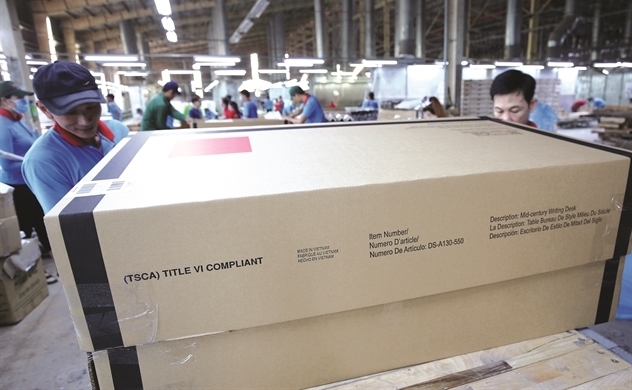 Vietnam’s membership in FTAs helps it obtain opportunities to increase its competitiveness in exporting products to choosy markets such as the US.

However, the problems in implementation of intellectual property rights in Vietnam may lead to a risk of foreign products counterfeiting the Vietnamese origin when exported to the US, EU and markets covered in the FTAs, which will cause tax revenue losses and unhealthy competition. More seriously, this may cause other countries to impose safeguard duties on authentic Vietnam goods.

As the surplus in trade with the US increases, concerns have been raised that Vietnam may ‘become involved in misfortune’.

Au Anh Tuan, acting director of the Customs Supervision and Management Department, expressed concern when anti-dumping and anti-subsidy duties were imposed on some Vietnamese products. Cold rolled coil and anti-corrosion steel using HRC imports from Taiwan and South Korea, for example, have been levied a 400 percent duty.

Other products are under investigation for anti-dumping taxation such as solar panels, bicycles and shrimp.

Analysts said that Chinese manufacturers not only ‘borrow’ Vietnamese origin to export products to the US, but tend to shift their production to Vietnam to avoid Chinese origin.

According to Nguyen Viet Phong from the General Statistics Office (GSO), Vietnam may become the place for Chinese enterprises to bring goods to and then export to the US and European countries. This may violate Vietnam's commitments on goods origin and put Vietnam in a risky position.

Of the $200 billion worth of Chinese exports on which the US imposed the tax rate of 25 percent, export turnover of electronics and wooden furniture accounts for the biggest proportion, 24.6 percent and 16.7 percent, respectively.

Vietnam’s electronics and wooden furniture exports to the US in the first five months of the year increased sharply.

The Central Institute of Economic Management (CIEM) said that the abnormal investment shifting from China (with newly registered investment capital of over $2 billion in the first nine months of the year), plus the increase in imports from China, are both leading to the worry that Vietnam may become the place for China to avoid US tariffs and other measures.