It is becoming more difficult for textile and garment companies to recruit workers as
labor costs keep increasing and workers quit to move to higher paying jobs. The only solution is changing the production method.

Three years ago, the International Labor Organization (ILO) warned that 85 percent of workers, or 1.7 million, in the textile and garment industry in Vietnam, will lose jobs in the 4.0 industry revolution. 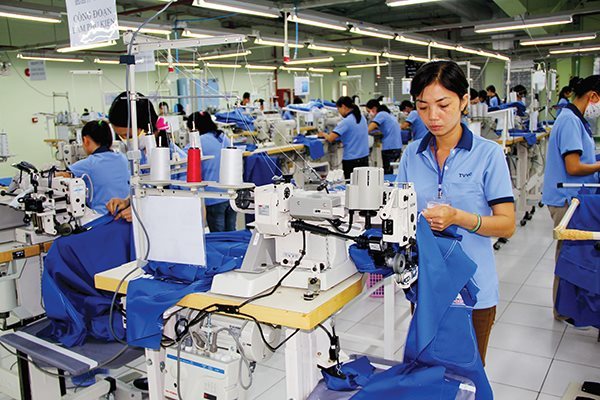 But this has not happened. On the contrary, many textile and garment enterprises are suffering because of job-hopping and the difficulties in recruiting new workers.

The shift of orders from China to Vietnam has turned Vietnam into the third largest textile and garment exporter in the world, but it has also caused a labor shortage.

Moreover, the strong development of food, electronics and telecom equipment factories has caused difficulties for textile and garment, and footwear factories, which use large numbers of workers. New foreign invested enterprises scramble for workers by offering higher pay, thus leading to a labor shortage.

Le Tien Truong, general director of the Vietnam Textile and Garment Group (Vinatex), also affirmed that the scenario of 85 percent of workers losing jobs has not happened.

The conclusion was made based on a Ministry of Science and Technology study on assessing the impact of the 4.0 industry revolution on Vietnam’s textile and garment industry, which was implemented by Vinatex.

According to Truong, machines and automation can be applied only in some sectors, while the apparel sector still needs a large number of workers. Suits and jackets, for example, cannot be done entirely mechanically.

In such a context, experts said that it is the right time for textile and garment enterprises to change the production method, renovate technology to optimize the production, and reduce the number of workers needed.

Some large enterprises have succeeded in changing production methods. However, the number of enterprises which can do this remains modest. ODM and OBM are still far beyond the capability of the majority of enterprises, which are small and weak at both corporate governance and technology.

Instead of getting benefits from the US-China trade war as predicted, Vietnam’s garment companies are meeting difficulties as US importers are reconsidering business with Vietnam’s exporters.