Household businesses out from the shadows

Household businesses are being encouraged to develop into private enterprises and contribute more to economic development. 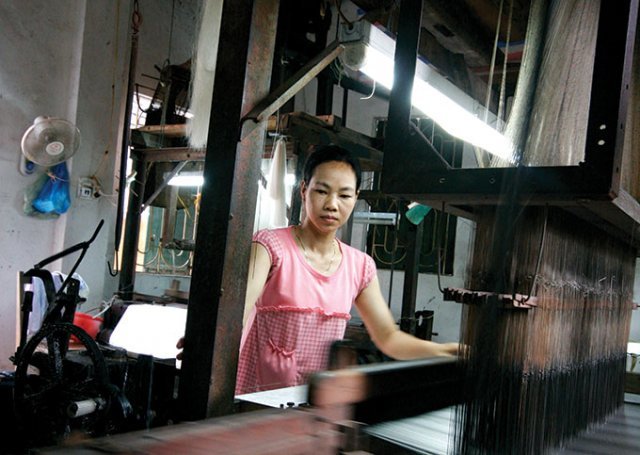 The Huong Thanh household business in Dong Ky ward, Tu Son town, in northern Bac Ninh province has grown rich over recent years, with annual revenue in the tens of millions of dollars, from hand-crafting fine art products and exports.

The household business (HHB) and more than 2,000 others in the locality, however, can no longer do business without registering with authorities, as Prime Minister Nguyen Xuan Phuc approved a project to put the informal economy into the GDP basket.

Mr. Nguyen Quoc Vuong, Chairman of the Dong Ky Fine Arts Product Association, said that HHBs are among five components in the “unobserved economy” and statistics will be compiled in every craft village.

According to the General Statistics Office (GSO), the project will improve the quality of statistics to fully and correctly reflect the socioeconomic circumstances, thus better serving planning by sectors and localities. An unobserved economy is an economy that reflects the performance results of all economic entities in society but whose performance has not been quantified.

An economy needs data that reflects its full and true picture, according to Mr. Nguyen Bich Lam, General Director of the GSO. Authentic statistics would serve as the basis for the government, ministries, branches, and localities to properly assess the situation to adopt solutions and policies to manage the economy and achieve socioeconomic development objectives.

Efforts to obtain statistics on the unobserved economy is a key function and such projects need to be promoted, Dr. Le Duy Binh, economist at Economica Vietnam, told VET. “From this measure, we would know the health of an economic sector in a certain period of time and come up with appropriate policies to manage and regulate the national economy,” he said.

“This would improve transparency, sustainability, and productivity in the economy.” In developed countries, with better and modern government, unobserved, underground, and informal economic activities often make only a small contribution to growth.

Mr. Dau Anh Tuan, Head of the Legal Department at the Vietnam Chamber of Commerce and Industry (VCCI), said the purpose of the project should not focus on collecting taxes from informal economic activities but instead aim to boost the development of business activities, especially by HHBs.

Some local economists argue that the informal economy should not be included in GDP, as it would increase it and be misleading. When GDP increases, it changes many other figures, such as budget overspending, while the ratio of public debt to GDP decreases.

The vitality of HHBs lies in flexible production and business operations, with their simple model allowing them to quickly adapt to new circumstances and sudden changes, thus enabling them to grow.

Meanwhile, with a bigger operational scale, private enterprises do not possess such flexibility. The number of enterprises that suspended operations or were dissolved in 2018 increased 49.7 per cent and 34.7 per cent, respectively, compared to 2017, despite record-high GDP growth of 7.08 per cent, according to the GSO.

The private sector is characterized by a high level of informality and quasi-formality, with excessive regulations, ineffective enforcement, and high compliance costs being key reasons why, according to a recent report entitled “Vietnam’s Private Sector: Productivity and Prosperity” released in 2018 by Dr. Binh at Economica Vietnam.

HHBs continued to be the preferred form for starting up a business, especially for those who do it out of necessity just to earn a living. The larger HHBs that benefit from this ambiguity provoke complaints from formally-registered enterprises regarding unfair competition.

HHBs are reluctant to graduate into enterprises because of the required changes in the accounting system, proper bookkeeping, compliance with more stringent social security and labor regulations, and higher tax reporting requirements, etc. When registered as a company, an HHB will be subject to more rigorous and transparent regulatory systems, which come with higher compliance costs.

Mr. Vuong from the Dong Ky Fine Arts Product Association acknowledged an obstacle seen in the village over recent years. Though Dong Ky is well known as a craft village with many “unknown billionaires”, many HHBs simply don’t want to join the formal economic sector as they can’t see the benefits.

According to Economica Vietnam, a ten employee HHB, after converting into an enterprise, will immediately incur an increase in regulatory compliance costs of VND181.2 million ($7,800) per year. Regulatory reforms and reductions in compliance costs are needed to promote the formalization of HHB.

Mr. Tuan said the GSO has collected information to assess the informal economic sector and self-consumption of households every five years, and only underground and illegal activities remain uncalculated in Vietnam’s annual GDP reports. HHBs shouldn’t be subject to this project, he added, but they have been encouraged to develop into private enterprises so they can make appropriate contributions to the State budget.

Ten years ago, evaluation reports prepared by other agencies and organizations measured the amount of cash outside of official circulation. The results showed that the value of this informal sector was about 30 to 35 per cent of GDP. Finding the same result, the Economica Vietnam report found that HHBs accounted for 30.4 per cent of GDP but only contributed 1.56 per cent to the State budget, excluding revenue from oil.

Compared to the private sector, the contribution of HHBs to GDP was triple and equivalent to 10 per cent of that from legally-registered businesses. The number of HHBs now stands at about 5 million. Meanwhile, a 2018 study published by Fulbright University Vietnam estimates that the sector involves around 57 per cent of the total workforce.

“Any improvement in the performance of HHBs will help boost overall productivity in the economy,” Dr. Binh wrote in the report. “The formalization process will also help accelerate the reallocation of resources from the HHB sector to the formal private sector, where productivity is higher, and the use of resources will be more effective.”

However, the HHB sector is currently subject to the same regulations while its scale is diverse and varied. This one-size-fit-all regulatory approach has not been particularly effective. Meanwhile, existing databases on HHBs are inadequate, fragmented, and missing much-needed information, according to the report.

A national database on HHBs with adequate necessary information would help give a detailed description of HHBs by segment, sector, industry, and geographic location, etc. Only then can policies and support measures from the government be effectively designed and implemented.

“We need to act carefully considering the key target of the project is HHBs and they are a large part of the informal economy. It would lead to negative opinions and be unfair on HHBs, which are contributing to economic growth and even impact development and the process of formalizing the sector,” Dr. Binh said.

Back at Dong Ky village, Mr. Vuong expects a project called “Village of Startups” will soon be launched, with the aim of 200 newly-established HHBs operating their business more professionally and transparently, complying with regulations on business, the environment, and workers, and meeting the requirements of foreign partners from the EU and Japan. But to reach this goal, there needs to be support from appropriate agencies in terms of administrative procedures and business environment, he added.