In Vietnam, technology firms struggle to hunt for talents

Startups, R&D projects, fintechs and e-hailing firms are all on the hunt for workers. 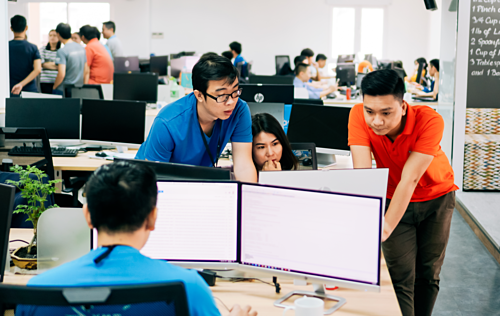 The talents that left the company, according to Ai, went to e-hailing firms, e-commerce and fintech, which are pouring big money into Vietnam.

As many workers have left, the existing staff has had to work harder. “We have never been so busy before. Workers have to work 12 hours a day,” Ai said.

Nguyen Huu Binh, CEO of TopDev, confirmed that the startup movement and huge R&D projects run by large corporations have increased the need for IT workers.

Nguyen Huu Le, chair of TMA Solutions, said the company decided to build an innovation park in Quy Nhon City, and that he had go to the central region to seek more workers.

Ai from KPMG said foreign companies are scrambling for IT talents from domestic firms. Electronics manufacturers such as Samsung, LG and Intel have been expanding their operation in recent years.

Some large groups are planning to come to Vietnam. More and more projects have kicked off, which require high-quality IT workers.

Nissan, for example, has 2,000 engineers working in Hanoi, in charge of designing most parts of Nissan cars.

A recent report of TopDev found that although universities have strengthened training, that salaries offered by companies are competitive and employers lay out the red carpet for talents, it is still difficult to find IT workers.

Employers pay VND30 million a month on average to experienced developers. For managers at different levels, the pay is not lower than VND35 million for those with five years or more of experience.

However, they admit that it is very difficult to find managerial officers because few candidates can satisfy specific requirements set by the companies.

“We have talents, but if training is not good, medium-quality workers won’t become high-quality ones. We know that talents just account for one percent or even lower,” said Nguyen Ba Quynh, CEO of Global CyberSoft.

Because of the lack of good workers, developers understand their value and tend to become choosier about jobs.

According to Ai, high pay alone cannot retain talents. “They pay attention to the working environment and they appreciate opportunities to work for interesting projects,” he said, adding that the rivals of large companies like KPMG are sometimes startups.

IT and computer science has become a hot training major at universities. Students must have at least 27.42 scores for 3 exam subjects to be able to enroll in the IT-computer science faculty of schools in the 2019-2020 academic year.

The technology community several days ago was stirred up by the rumor that most of the development team of a large Vietnamese technology firm had left for another company, causing many key projects of the firm to be delayed.