Foxconn (Taiwan), TLC and Lenovo (China), Hanwa (South Korea) and Yokowo (Japan) are relocating their factories to Vietnam as a shelter from the ‘storm’ of the US-China trade war.

The trade tensions between the US and China, investment flow and next-generation FTAs, including EVFTA, CPTPP and RCEP (which is hoped to be completed by the end of 2019) , all have brought positive influences to Vietnam’s industrial market. 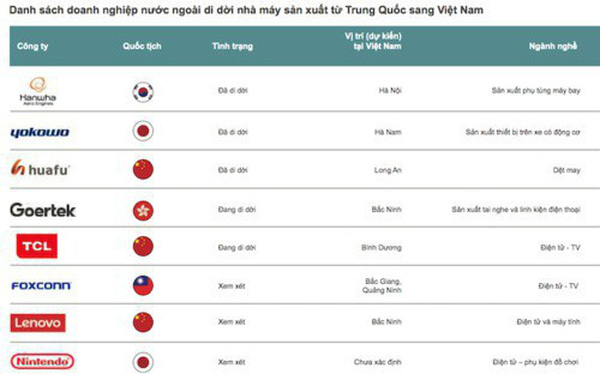 The manufacturers relocating their factories from China to Vietnam include Goertek (Hong Kong) and TLC. The former, specializing in headphones and phone accessories, will move to Bac Ninh, while the latter, specializing in TVs and electronics, will set up a factory in Binh Duong.

The companies which are considering the relocation are Foxconn (Taiwan), Lenovo (China). Sharp, Kyocera, Nintendo and Asics (Japan).

The high population and population structure give Vietnam advantages in comparison with other regional countries. In 2018, Vietnam had 94.6 million people. Like Indonesia and Malaysia, Vietnam has a young population with the number of people aged over 65 just accounting for 6-7 percent, while the figure is 11-12 percent in China and Thailand.

Young people of working age (15-54) account for 60-62 percent of total population. The figure is nearly the same as Malaysia (57 percent) and Indonesia (59 percent) and Vietnam has to compete with the two countries to catch the eyes of big manufacturers considering where to move.

However, Vietnam has a big advantage – its GDP growth rate is the highest in Southeast Asia. GDP is expected to reach 6.8 percent in 2019, higher than the Philippines (6.2 percent), Indonesia (5.8 percent), Malaysia (4.5 percent), Thailand (3.5 percent) and Singapore (2.4 percent), according to ADB.

Vietnam is also attractive thanks to its high industrial production growth index, 9.6 percent in the first seven months of the year.

Vietnam has a high export growth rate to the US. In the first three months of the year, Vietnam’s exports to the country grew by 40.2 percent. Textile and garment exports alone brought $4.42 billion and footwear $2 billion.

Most currencies have depreciated against the US dollar but the Vietnam dong value has remained stable.

Many Vietnamese enterprises are keeping a close eye on the escalating US-China trade war and have said the challenges from it outnumber the opportunities for them.