Nguyen Gia Khanh, a housewife in Can Tho City, was seen quickly selecting watermelons from a pile of fruits on the pavement of Nguyen Van Cu Road in Ninh Kieu district. 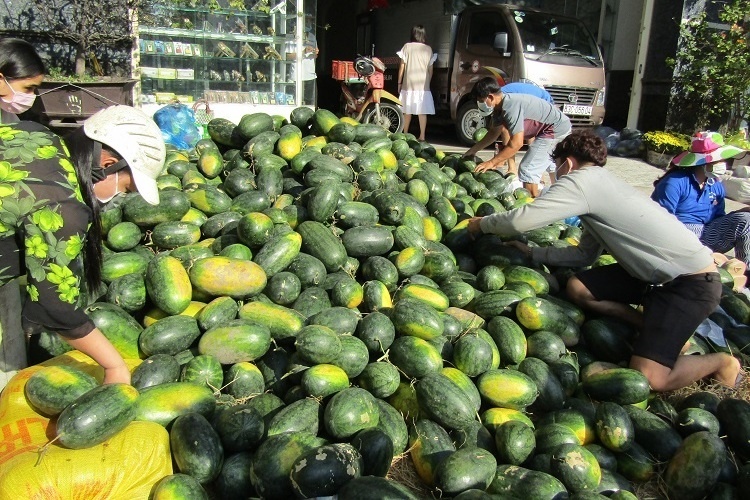 “Watermelons are sold at VND5,000 per kilogram. It is dirt cheap,” she told reporters, explaining why she decided to buy 100 kilograms.

“I will give some products to my neighbors and relatives, and I will send the remaining to the teams of people who do charity at hospitals,” she said.

Watermelon and dragon fruit are selling at surprisingly low prices, from traditional markets to movable pavement stalls and supermarkets.

As the fruit export to China is getting stuck amid the coronavirus outbreak, the prices have dropped dramatically and farmers have had to sell at bargain prices.

Just within five hours of February 8, tens of tons of watermelons from Gia Lai province sold out. Urbanites bought them in large quantity to respond to the call to ‘rescue’ farmers who are suffering from the export decline.

Chia Xon, a farmer from Gia Lai, said he could sell watermelon at VND5,000 per kilogram. “I have to sell at a loss, but the sale helps reduce the loss,” he said.

He has incurred a loss of VND10 million per 0.1 hectare.

Catfish is also awaiting rescue campaigns. Farmers said before the nCoV broke out, the catfish sold at VND22,000-23,000 per kilogram, but the price dropped to VND17,000. Merchants have stopped collecting catfish as the export to China has been suspended. And domestic seafood companies only buy catfish in small quantities.

Mekong Delta is considered the fruit and catfish center of the country. When they have bumper crops, farm produce prices drop sharply because of oversupply. At this moment, the situation is even more serious because of the decline of the Chinese market.

Chuong Van Khanh, in Thot Not district in Can Tho City does intensive catfish farming on an area of 50,000 square meters and produces 300 tons of catfish each year.

But he is met with misfortune this year: the catfish couldn't sell. Khanh decided to dry catfish, and make fish sauce and other processed products to ease losses.

According to farmers in Can Tho City, An Giang and Hau Giang provinces, the selling prices need to be at least VND21,000 per kilogram to cover farming cost.