Instead of getting benefits from the US-China trade war as predicted, Vietnam’s garment companies are meeting difficulties as US importers are reconsidering business with Vietnam’s exporters.

The 10 percent tax rate on $300 billion worth of Chinese exports, to take effect on September 1, will affect daily consumer goods such as footwear and garments, not raw materials. 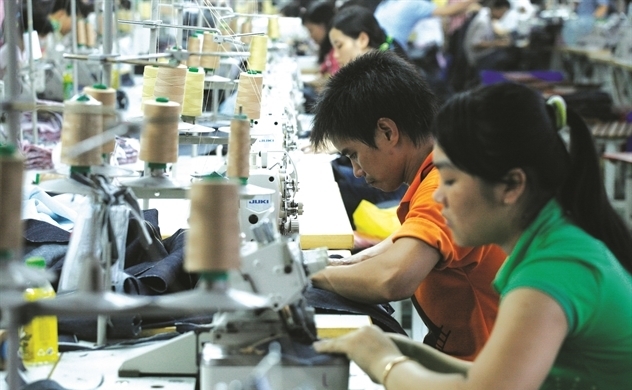 Nhip Cau Dau Tu quoted Run Dutta from Garan Incorporated, a garment retailer in New York, as saying that there is no problem related to quality and delivery, but the price of products from Vietnam is 10 percent higher than Chinese goods.

In addition, uncertain policies of the US and the risk of more protectionism are causing importers to hesitate to buy products from Vietnam.

According to the Vietnam Cotton and Spinning Association (VCOSA), no new orders came from China in the first half of the year.

China has launched a large amount of cotton stockpile into the market, which has caused cotton prices to fall sharply.

There are orders from South Korea, Japan, Egypt, Turkey, the Philippines and Taiwan, but the orders are small and the prices have decreased.

At Thanh Cong Textile and Garment (TCM), the revenue from fabric and garments increased by 10.3 percent and 15 percent, respectively, compared with the same period last year, which helped offset the 21 percent decrease from yarn, thus helping revenue in H1 increase slightly by 7.4 percent to VND1.77 trillion.

However, the higher labor cost and the decrease in yarn selling price have lowered TCM’s gross profit margin in H1.

VnDirect Securities estimated that the average yarn price has dropped by 8 percent compared with the same period last year, thus leading to a fall in gross profit margin from 9 percent to 6 percent.

The US-China trade war has triggered production relocation from China to Vietnam and promoted competition in both the textile and garment and footwear industries.

Than Duc Viet, general director of Garment Company No 10, said the production relocation to Vietnam has led to a scramble for workers in the textile and garment industry.

Viet noted that there are signs of Chinese enterprises making garments in China and taking products to Vietnam for packaging.for export to the US. The tax in China is 20 percent, while in Vietnam 17 percent. The method of ‘borrowing’ Vietnamese origin has been used not only in textile and garment sector, but in other industries as well.

Will 85 percent of garment workers lose jobs in 4.0 industry era?

The scenario that 85 percent of garment workers would lose jobs to robots because of the 4.0 industry revolution will not happen in Vietnam in the next 10 years, businesspeople say.