To transition to renewable energy, Viet Nam will need assistance and aid from its foreign partners, a top energy official has said. 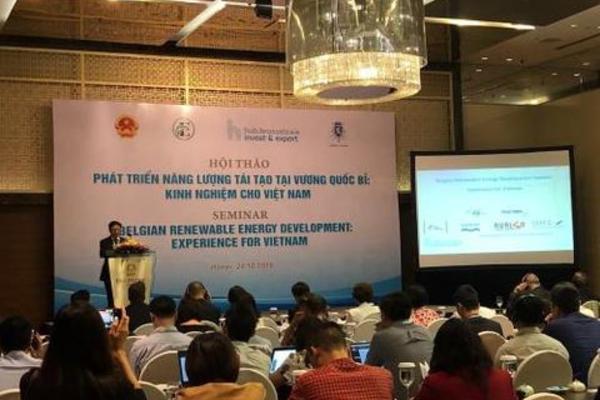 However, the transition to renewable energy in Viet Nam was still in the first stage, thus Viet Nam needed to learn from the successful story of other countries around the world, including the Kingdom of Belgium.

At the seminar, participants discussed issues related to the production and storage of existing renewable energy, infrastructure connection, internal and national power grid and the support of the EU for sustainable energy development in Viet Nam.

To encourage the use of renewable energy, the MOIT has submitted incentive mechanisms for solar, wind and biomass power to the Government.

They include the application of a feed-in tariffs (FIT) mechanism for 20 years, preferential corporate income tax and preferential land use tax.

However, the transition to renewable energy in Viet Nam was still in the first stage, thus Viet Nam needed to learn from the success of other countries around the world, including Belgium.

According to Paul Jansen, Ambassador of the Kingdom of Belgium to Viet Nam, the seminar is an opportunity for domestic and international experts to meet and exchange to find solutions to develop renewable energy in Viet Nam, opening up opportunities for investment co-operation in the renewable energy industry between businesses of the two countries.

The EU and Belgium are ready to share experiences in developing renewable energy to Viet Nam, helping connecting businesses of the sides, said Jansen.

Eric Franssen, Business Development Director of John Cockerill Group, said Viet Nam has many advantages in renewable energy, especially biomass power as the country has a lot of waste in industrial parks.

"Viet Nam also has strength in wind power the two sides can collaborate in this area,” said Franssen.

A representative of DEEP C Green Energy Company said energy was one of the issues businesses seek when investing in Viet Nam.

Vietnam should intensify efforts to develop renewable energy in an effort to participate in this indispensable worldwide trend, said Nguy Thi Khanh, director of the Green Innovation and Development Center.

Where next for renewable energy in Vietnam?