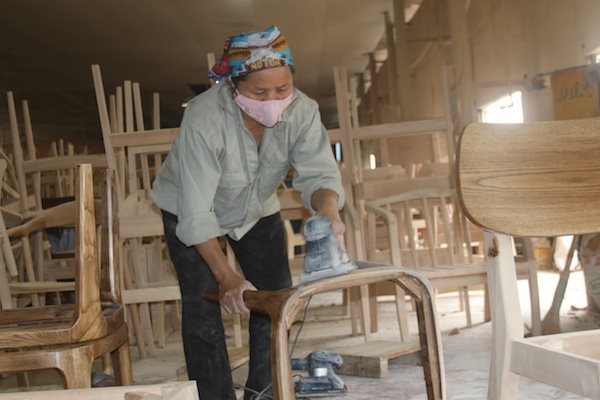 To Xuan Phuc from Forest Trends, at a workshop on woodwork industry held on June 21, said the US new tax rates on woodworks from China has caused the shift of capital from China to Vietnam to avoid tax.

According to the Vietnam Timber and Forest Products Associations (Vifores), the export turnover of wooden exports to the US has increased sharply, especially since the second half of 2018.

If the Q1’s export expansion can be maintained, Vietnam would become the seventh largest woodwork supplier in the US in 2019 instead of the 12th, Phuc predicted.

The items with the highest export growth rates include plywood, particle board, chairs and kitchen furnishings.

Experts pointed out that the US-China trade tension has created some new risks for Vietnam’s woodwork industry.

FDI projects in Vietnam, especially Chinese invested ones, could be a part of the strategies by Chinese companies to avoid taxes when entering the US market.

They noted that projects in the woodwork industry recently have small scale with investment capital of around $2 million. Besides new projects, Chinese have also poured money into existing projects to expand production. Chinese investors have accelerated M&A activities and hired Vietnamese companies to do processing.

These actors indicate that Chinese investment in Vietnam are being done to obtain Vietnamese origin for their products. Experts have warned that this will bring risks to Vietnam’s woodwork industry and could be seen as trade fraud.

The US now suffers a trafe deficit with Vietnam. According to UNCOMTRADE, in 2017, the US imported $2.4 trillion worth of products and Vietnam ranked 12th among partners exporting products to the market.

As for the woodwork industry, according to the General Department of Customs (GDC), Vietnam saw a trade surplus of $2.7-2.8 billion a year in trade with the US.

Woodwork exports soar, but it’s not all good news

Woodwork exports increased sharply in Q1, partially thanks to higher demand from the US. However, experts say this may not be good news for the industry.