In the context of tightened and expensive domestic capital sources, mobilising capital from abroad is an opportunity for local reputable enterprises and banks, and many of them have recently announced huge loan agreements with foreign financial institutions.

CEO of VPBank Nguyen Duc Vinh said the capital sources will help VPBank promote credit programmes for small- and medium-sized enterprises in Vietnam, businesses owned by women, and businesses in the fields of healthcare, education, hygiene, traffic, and building social housing, giving them access to relatively low-cost capital for development.

SeABank on November 12 said it and the US International Development Finance Corporation (DFC) had signed a loan agreement worth 200 million USD. With support from DFC, SeABank will improve its financial capacity to better implement the proposed projects, focus on the credit gap and solve the gap between the financial needs of the market and the existing source of money in the economy.

Previously, VIB completed the disbursement of a 150 million USD loan from the International Finance Corporation (IFC), a member of the World Bank Group. With a term of five years, the IFC-led loan aims to support VIB to boost its loan portfolio for individual customers who are looking to buy, build, and repair houses. Meanwhile, at least 30% of the disbursement value will be financed for home loans worth less than 35,000 USD.

Masan Group Joint Stock Company (Masan) and The Sherpa Company Limited - a direct subsidiary of Masan – have been recently provided a 600 million USD syndicated term loan. This was the largest syndicated loan with the longest term that Masan has ever raised, attracting 37 lenders in the fundraising process.

According to experts, as fundraising in the domestic market is facing difficulties, the huge deals are a bright spot to help domestic enterprises continually promote their business and production, and create a driver for further growth next year. At the same time, the success is also a motivation for other enterprises to seek new capital.

However, Dr Nguyen Huu Huan, head of HCM City University of Economics’ Finance Department, noted enterprises need to use measures to minimise exchange rate risks when raising foreign capital. He said the US dollar has so far strengthened more than 8% against the Vietnamese dong.

Besides, international capital is not cheap as the US’ federal funds rate currently hits 4% per year, Huan said.

FiinGroup’s experts said though interest rates of foreign loans are not cheap with many costs including nominal interest rate, exchange rate insurance cost, guarantee cost and transaction fees, the successful deals are still quite a positive development in the context of tightened domestic fundraising channels.

According to FiinGroup’s experts, the deals also show the confidence of foreign financial institutions in the long-term growth of large Vietnamese enterprises, whose information and credit profile are clear. Fundraising is still possible and the level of risk is reflected in interest rates. Foreign currency loans have also contributed to solving the problem of debt maturity pressure and the need for debt restructuring of some enterprises./. VNA 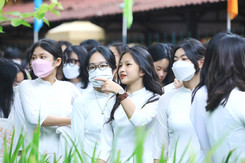