Can Tan Son Nhat airport improve its capacity in an efficient way? 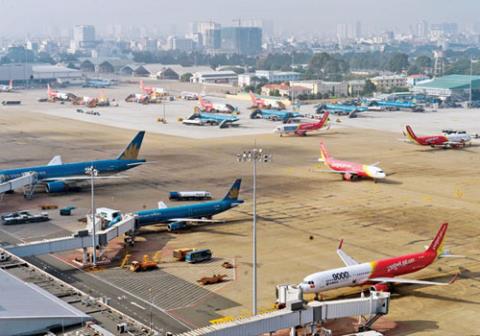 Luong Hoai Nam, former CEO of Jetstar Pacific, said there is one flight taking off or landing at Tan Son Nhat every two minutes, or 30 flights every one hour.

He believes that if comprehensive solutions are taken to increase the number of take off/landing turns, Tan Son Nhat would be able to serve one flight every minute. As such, 60 flights could be served within one hour.

The free time between flights at Tan Son Nhat has shortened significantly. It received 786 flights a day on January 25, 2017, which meant a frequency of one flight every 1.8 minutes.

Tan Son Nhat has been applying a coordination model between VATM (Vietnam Air Traffic Management Corporation) and ACV (Airports Corporation of Vietnam) which allows decisions to be made at the airport.

Bui Quang Vinh, former MPI Minister, now a member of the PM’s advisory council, still thinks it is necessary to continue improving the management process to increase the capacity at Tan Son Nhat.

At an event held on August 12, Vinh pointed out a measure which he believes is “not too costly to increase Tan Son Nhat’s capacity by twofold just within six months”.

According to Vinh, there are two things that need to be implemented concurrently. First, expanding, repairing and upgrading the airport and terminals. Second, changing the airport management process.

Changi Airport in Singapore is not that large compared with Tan Son Nhat but it can the number of passengers served is double or triple, thanks to good management capability.

Other experts also pointed out that traffic congestion at Tan Son Nhat is blamed on limited qualifications and management capability.

Tran Quang Chau, chair of the Vietnam Aeronautical Science and Technology Association, said it is necessary to accurately assess congestion in the air and on land, and other factors, including the qualifications, management capability and synergistic coordination among the links of flight control.

Bui Van Vo, former Head of CAAV’s Flight Management, said that it was necessary to increase the capacity of Tan Son Nhat by using advanced technologies in flight control and improving the capability of air traffic control officers.