“A non-cash society is coming to Vietnam,” Chairman of Alibaba Jack Ma told the Vietnam E- Payment Forum (VEPF) held on November 6 in Hanoi with the main topic “Mobile Payments”.

“A non-cash society is coming to Vietnam,” Chairman of Alibaba Jack Ma told the Vietnam E- Payment Forum (VEPF) held on November 6 in Hanoi with the main topic “Mobile Payments”. 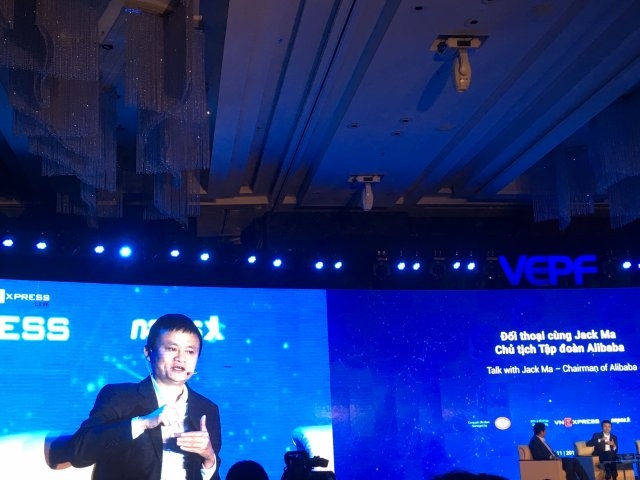 He said that 54 per cent of Vietnam’s population use mobile phones but they use both mobile payments and cash.

Mr. Tran Cong Quynh Lan, Deputy General Director of the Vietnam Joint Stock Commercial Bank for Trade and Industry (Vietinbank), said that mobile payments will bring a new revolution to Vietnam regarding payment methods and be accompanied by many benefits. “The operations of commercial banks, however, remain inconsistent,” he said.

Commercial banks, he added, must cooperate together to ensure advantages are provided to customers and mobile payments increase.

Mr. Ma noted that, in the past, Alibaba did not have many relationships with banks but he told his colleagues that they should start to do so right now. “We believe that within ten years we will succeed,” he said.

Talking about AliPay, Alibaba’s mobile payment service provider and a prominent example for the forum, Mr. Ma said that 14 years ago, when he got the idea for AliPay, many people told him that it would be impossible because Chinese people are too fond of cash payments.

He also spoke of policies to support small and medium-sized enterprises (SMEs). Success, he said, must bring people together and all young people must be given opportunities. Only 20 per cent of enterprises in the global economy are large enterprises, while the remaining 80 per cent are SMEs. The focus should therefore be on providing them with proper support.

Member of the Government Advisory Group, Vu Viet Ngoan, asked Mr. Ma whether there is space for SMEs and startups given the dominance of leading tech companies. “We do not dominate the market but support local businesses,” Mr. Ma said. This is a great way to help small businesses grow in the local market and reach out to the outside world, especially in areas where they want to do business. “We do not compete; we support you,” he said.

Jack Ma is a Chinese business magnate who is the Founder and Executive Chairman of Alibaba Group, a conglomerate of internet-based businesses.

He is one of richest men in China and in Asia, with a net worth of $47.5 billion. He has become a global icon in business and entrepreneurship, one of the world’s most influential businessmen, and a philanthropist known for expounding his business philosophy. He was ranked second on the Fortune 2017 “World’s 50 Greatest Leaders” list.

He is one of the world’s most powerful people and been a global inspiration to many, giving numerous lectures and advice throughout his life and career.