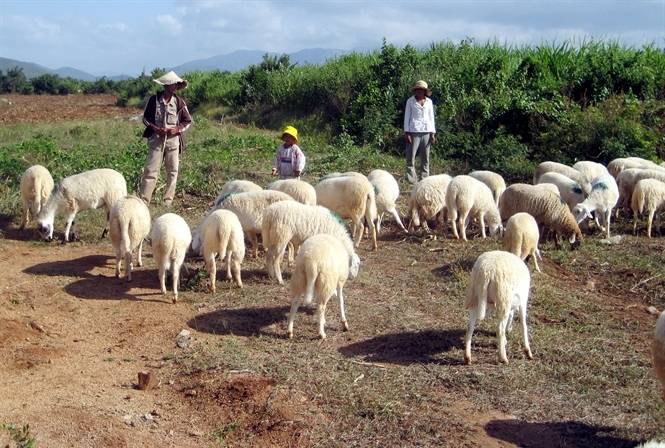 Hoàng Thanh Vân, head of the Animal Husbandry Department at the Ministry of Agriculture and Rural Development, said the central region accounted for the largest proportion of these kinds of animals.

Vân spoke at a seminar held in central KhánhHoà Province about the effects of drought and saltwater intrusion on animal husbandry in the south-central coastal region.

MARD’s Deputy Minister Vũ Văn Tám, who also spoke at the seminar, has assigned the Animal Husbandry Department to assess the future of animal breeding during periods of prolonged heat waves and drought. The plan will also include new zones for animal husbandry.

Sheep output in the two central regions has reached 1,850 tonnes a year, accounting for more than 98 per cent of the country’s sheep output, according to MARD’s Animal Husbandry Department.

Most sheep in the region are bred in the coastal provinces of Ninh Thuận and Khánh Hoà.

The breeding of sheep, ostriches, goats, honeybees and silkworms have helped increase farmers’ income, especially after losses of crops affected by drought and saltwater intrusion.

The Central Highlands area produces 9.3 tonnes of honey a year, accounting for 60 per cent of the country’s honey output.

Tào Anh Tuấn, deputy director of the Khánh Hoà Province Department of Agriculture and Rural Development, said the province’s animal quantity had not declined in recent years, but the impact of the ongoing drought had led to the death of many cattle in Cam Ranh City.

“The drought has also reduced the amount of natural food for animals,” he said.
In Khánh Hoà Province, officials are drafting a plan for its agricultural restructuring, with a focus on animal husbandry. It will give priority to develop animals that can survive drought conditions.

Both Khánh Hoà and the central region in general are facing a shortage of water as well as animal feed and drought-resistant breeding stock.

Hydro-meteorology forecasts have said that the south-central region would continue to be affected by severe drought, according to Nguyễn Văn Tỉnh, deputy head of MARD’s Irrigation Department.

A shortage of fresh water for daily use as well as animal food is expected to occur in several provinces like NinhThuận, Khánh Hoà, Phú Yên and Bình Định.

Drought in the south-central region is forecast to continue until the end of August.