Chief Justice of the Vietnam Supreme People’s Court Truong Hoa Binh is paying a working visit to China from March 23-25.

Chief Justice of the Vietnam Supreme People’s Court Truong Hoa Binh is paying a working visit to China from March 23-25 with the aim of sharing information about the two countries’ legal and judicial systems and experience in lawmaking and judicial reform. 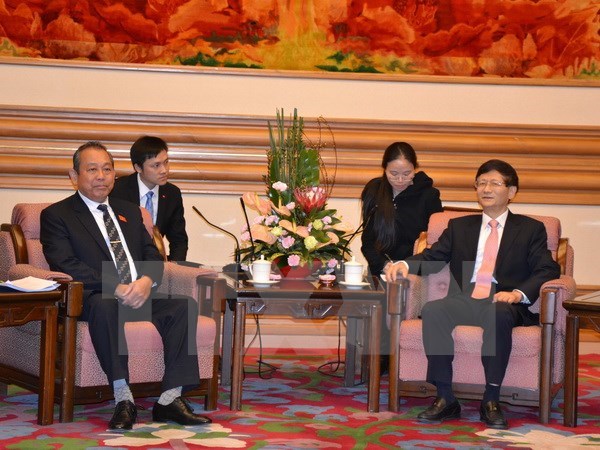 During his stay, Binh met with Meng Jianzhu, Secretary of the Chinese Party Committee's Commission for Political and Legal Affairs, who spoke of the outcomes of cooperation between the two courts and emphasised the necessity of further intensifying the ties.

Meng backed the courts’ extension of their Memorandum of Understanding (MOU) on Judicial Cooperation and their negotiations on signing a new agreement in 2017.

He expressed his belief that the development of bilateral judicial ties will contribute to boosting the two countries’ friendship and comprehensive collaboration.

Binh informed the host of the outcomes of his talks with President and Chief Grand Justice of the Chinese Supreme People’s Court Zhou Qiang, as well as Vietnam’s judicial reform achievements and directions for the two courts’ cooperation in the future.

Earlier, the Vietnamese official held talks with Zhou Qiang, during which they agreed on the extension of the MOU on Judicial Cooperation, signed on April 18, 2011 to December 31, 2016. They also agreed to early negotiations towards the signing of a new agreement next year.

They also reached common perceptions on several important issues, including intensifying delegation exchanges and the sharing of experience in judgment and legal precedents.