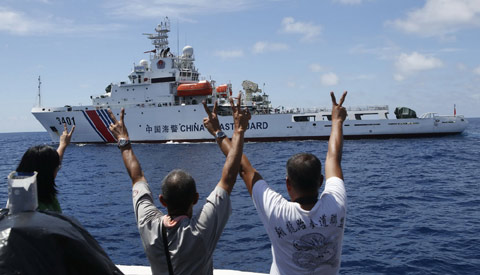 With its strong military power and naval forces, China has gradually taken steps and provoked countries in the East Sea and East China Sea. China is also using its soft power to realize its illegal claims by different forms, including:

- China has invested heavily in building fabricated materials confirming its historical evidence on the islands and archipelagos belonging to Vietnam in the East Sea. These documents are compiled methodically, systematically and published continuously. The number of articles published on China’s scientific journals is up to thousands, not to mention a large number of studies and M.A, PhD. dissertations on this subject.

- China has maintained a large team of scholars, who often make arguments and comments in the forums about topics on the East Sea dispute. These people are very good at foreign languages and have enormous understanding of China’s viewpoints and they support China’s viewpoints.

- China has published many books and newspapers on culture, geographical maps, tourist maps, and globes with the nine-dotted line maps for wide circulation in other countries. Visitors to China, including those from the countries involving in the East Sea disputes, are also presented with such souvenirs. Chinese cultlural exchange organizations are also very generous to give such gifts to international guests.

We have heard that China has spent a lot of money to entice foreign scholars to conduct studies on the East Sea? Do you know about it?

The international research community is not surprised by this information!

Through many international researchers I know that in recent years China has spent a lot of money to invite international experts to chair or participate in research projects related to the maritime subject, such as sovereignty disputes, sustainable development, marine environment, maritime culture, island culture, fisheries, farming on islands ... Then China published these studies in English.

In fact, there are some researchers who showed very objective viewpoints in their studies published a few years ago but now their articles support China’s illegal claims.

It seems that international newspapers are also affected by the "soft power" of China because sometimes we see articles follow China’s argument.

That’s right! China has carried out the same policy with reporters of international newswires. Currently there are several reporters who are writing articles supporting China’s viewpoint, although these articles always receive comments from opponents.

For example, the article "Who is the biggest aggressor in the South China Sea?" by Greg Austin, published in The Diplomat on June 18, which said that Vietnam is the aggressor!

Professor Carl Thayer immediately wrote an article, posted in The Diplomat on June 21, pointing out the inaccurate arguments to the truth in Austin’s article and concluded "It is implausible to suggest that Vietnam is – to use Austin’s emotive language – “the aggressor” on the basis of evidence presently available or to conjure up a threat from the tiny specks of features that Vietnam occupies".

In fact there has been a "divergence" of views among international scholars and international press. This is of course what China wants and tried to do. The more controversies like this happen, Vietnam’s struggle to regain sovereignty over the islands and entities that have been illegally occupied by China will be more complex and more difficult.