As China has unexpectedly stopped collecting bananas, a large amount of bananas remains unsold, including 20,000 tons in Lao Cai and Lai Chau alone. 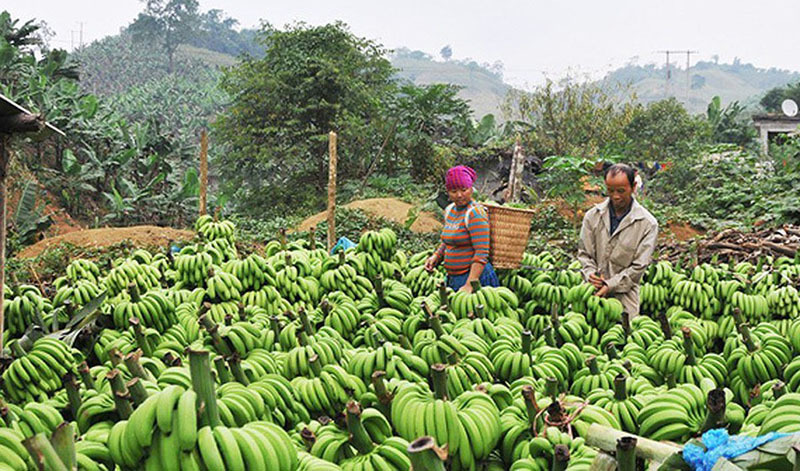 According to Taskforce 3430 under Ministry of Agriculture and Rural Development, because of Covid-19, farm produce consumption has dropped.

In Lao Cai, for example, vegetables have been selling more slowly than the same period of previous years, while the prices have decreased by VND2,000 per kilogram.

Lao Cai residents expect to harvest 17,500 tons of bananas in September-November, but they don’t know where to sell the bananas as China has stopped transactions.

“There will be 2,000 tons of bananas that need to be consumed in September,” the taskforce reported.

In Lai Chau, the interruption in demand from China has also led to a high inventory of 3,000 tons of bananas. Meanwhile, local farmers will harvest 4,000 tons more in September.

The dried tea inventory in the locality has also soared to 2,400 tons.

The same situation is occurring in Thai Nguyen which has forced the tea price down by 10-15 percent. Farmers are also in the high harvesting season of custard apples with the estimated output of 6,500 tons and longan, 5,500 tons.

Agriculture enterprises are facing difficulties. Slaughtering, meat processing and preliminary treatment are under strict control, which has caused congestion in sales.

Farmers have to pay more to take care of and feed livestock. Meanwhile, animal feed and veterinary medicine prices are on the rise.

The sale of poultry products has also been going slowly. The prices of breeders have decreased by 30-35 percent. Some farmers have had to sell below production costs (VND4,000-6,000 per one one-day chick).

Analysts warned that the current problems may lead to a short supply in poultry eggs in the last months of the year.

To help boost exports, the taskforce has asked ministries to negotiate with Chinese agencies to help improve circulation of farm produce. It has also urged local authorities to apply measures to encourage enterprises to collect fresh farm produce from farmers for processing.

The taskforce has also made proposals to settle problems in farm produce circulation and in agricultural materials and logistics costs, including a proposal on cutting electricity bills for enterprises organizing production in accordance with the ‘three on-the-site’ principle.

Ministries are strengthening cooperation with each other and with Chinese counterparts to solve difficulties in exporting agricultural products at the country's border gates.