VietNamNet Bridge – The Ministry of Construction (MOC) has insisted that the investor, design consultant, project planner and EPC contractor must accept responsibility for the projected cost overruns of the Cat Linh-Ha Dong railway project.

VietNamNet Bridge – The Ministry of Construction (MOC) has insisted that the investor, design consultant, project planner and EPC contractor must accept responsibility for the projected cost overruns of the Cat Linh-Ha Dong railway project. 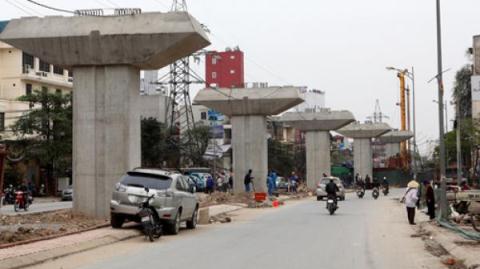 MOC affirmed this in its document to the Government Office following Deputy Prime Minister Hoang Trung Hai’s request to clarify responsibility for the sharp increase in the Chinese ODA-funded project’s estimates.

The initial press release on the project said its total investment capital would be VND8.77 trillion, or $553 million, of which $419 million would be funded with Chinese preferential loans, with the remaining balance from the Vietnamese government.

The Vietnam Railway Department would act as the investor of the project, and a Chinese company was chosen as the EPC (engineering, procurement, construction) contractor.

However, MOT later announced that the price tag had ballooned to $891 million, or $338 million above the initial estimate.

Dr Nguyen Dinh Tham from Hanoi Civil Engineering University affirmed that current laws do not allow for an adjustment of investment capital in projects. Citing the Construction Law, Tham said projects must be examined again from the very beginning if the newly proposed cost is more than 10 percent higher than the initial estimate.

A lecturer of the University of Transport cited government Decree No. 83 as saying that it is nearly impossible to adjust the total price tag of construction works.

“The adjustment can only be made for some special projects with the Prime Minister’s nod,” he said.

According to Dr Pham Van Ky from the University of Transport, the investor, consultants and supervisors should have caught and pointed out those elements of the EPC contractor’s design that had unreasonably low estimates.

MOT, which has become the target of the public’s criticism, has gotten furious amid the comments.

“When we do a good job, we never receive compliments. Meanwhile, people have kicked a fuss just because of this small problem,” said Nguyen Huu Thang, Head of the Railway Department.

“MOT will decide upon disciplinary measures. At the most, officers and engineers involved in the case may have to resign from their posts,” Thang said. “However, the most important thing we have to do now is to speed up the project’s implementation”.

When asked about his personal responsibility, Thang said that he would accept any disciplinary measure to be decided by the ministry, and that he has done the best he could.

Prior to that, MOT’s Deputy Minister Nguyen Hong Truong said it is quite normal for the actual cost of projects to be higher than the initial estimates.

“This has happened with most of the implemented projects,” Truong said.

“Following Deputy Prime Minister Hoang Trung Hai’s instructions, MOT will join forces with the Ministry of Finance to negotiate with the Chinese side for an additional loan,” Truong said.