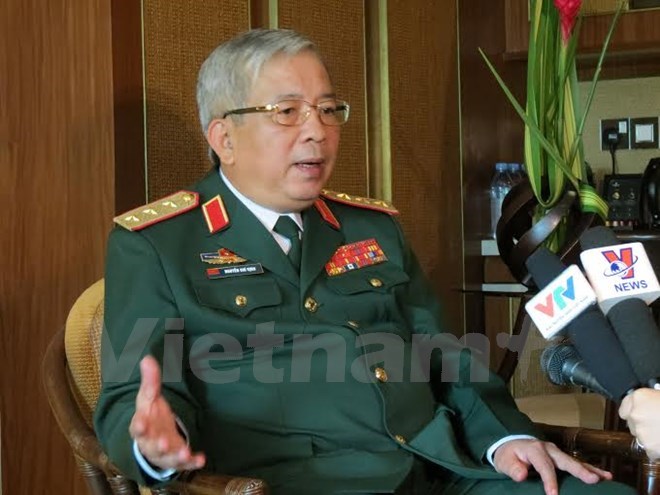 Cooperation without competitive negotiations will prevent Vietnam from getting equality on the basis of international law, while competitive negotiations without cooperation will lead to confrontation and conflicts, Vinh stated in his interview with Vietnam News Agency correspondents in Singapore on June 5 after the dialogue’s fourth plenary session.

He said that during this year’s dialogue, the East Sea issue continued to be the focus of the event.

On the East Sea issue, Vietnam’s consistent point of view is to settle the issue by peaceful means on the basis of international law.

The country is implementing this policy by affirming its sovereignty over its Truong Sa (Spratly) and Hoang Sa (Paracel) archipelagoes and its continental shelf.

Vietnam opposes all declarations that differ from the country’s sovereign ones as Vietnam’s claims are backed by historical evidence and conform with international law.

The deputy minister noted that different interpretations of international law among nations lead to incorrect implementation of law.

Vietnam wishes to negotiate peacefully and abide by international law according to a consistent interpretation, he confirmed.

He also stressed that the country completely supports world powers’ involvement in the region if the involvement is based on international law and brings about equality, prosperity and peace for the region. Vietnam objects to any interventions that can lead to conflicts and arms race.

For the East Sea issue, Vietnam continually shows its stance of standing for its national interests and for its sovereignty in disputes with China and several ASEAN countries.

Along with competitive negotiations, the country intensifies cooperation to find common ground and build trust with China and other countries to gradually address the issue, Vinh stated.

This measure is not new but suitable in the context of the complicated East Sea situation, he added.

Regarding the role of ASEAN countries in maintaining peace and stability in the region, he said that ASEAN plays an important role.

However, whether the group’s voice is helpful or not depends on its member states’ solidarity.

As a common community, ASEAN should intervene in the issues of each nation in the region and intensify cooperation with other countries outside the region, especially powers like China, the US, Japan, and the Republic of Korea, and within the framework of the ASEAN Defence Ministers’ Meeting Plus, Vinh suggested.

According to him, there are currently signs showing a lack of unity in ASEAN.

Therefore, if the group does not consolidate its unity, it will lose its central role and its member states will be affected as well, he added.