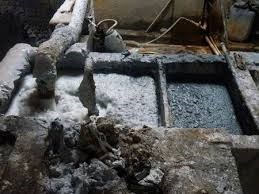 Above 95 percent of households in the two villages make paper tissue, with 200 workshops providing 300,000 tons of tissue every year to the market.

He said he collected scrap paper materials through his large network of agents located in many provinces and cities from the north to the south.

N, the owner of a tissue workshop in Phuc Lam Village, also admitted that the “made in Phuc Lam” tissues were mostly made of scrap paper, not wood or bamboo.

“The tissues thrown away at street rice shops and restaurants are the best materials,” said Tran Thi Loan, 42, in Yen Phong District of Bac Ninh province, who said she was  a scrap collector.

“Paper recyclers prefer these materials the most, because it will take less time and chemicals to recycle the tissues,” she explained.

Loan and other collectors get discarded tissues from restaurants and shops for free.

She sells them to recycling workshops for VND1,500 per kilo. Loan collects hundreds of kilos of tissues every day from different sources, and puts them in packs which are later carried away to Phong Khe and Phuc Lam.

In general, the workshops in the two villages skip many necessary steps when recycling paper, including extracting impurities, dust and chemicals, because they want to cut production costs and investment rates.

However, the recyclers still can make very white tissues after a production process in which the dirty scrap paper is dissolved in a mixture of chemicals, including sodium hydroxide and bleach.

Dr. Nguyen Huy Thinh from the Hanoi University of Technology warned that the overuse of bleach will generate toxic chemical residues. If the residue is discharged directly into the environment, it will contaminate the underground water.

If the contaminated underground water is used to make sanitary tissues, the products will contain toxic substances.

“The tissues are sources of germs which cause respiratory, skin and eye diseases,” Thinh said.

Hoa, the owner of a paper recycling workshop in Phong Khe, said nine kilos of soda and 35 liters of bleach are needed for one ton of white scrap paper.

Books and photocopy papers will need a higher amount of bleach, about 10 kilos of soda and 40 liters of bleach.

“We all know that chemicals can harm human health. However, we have no other choice in this case,” Hoa said.

Nguyen Van Bay in Phu Lam Commune said he has been suing the local paper recycling workshops for nine years, because the environment has become seriously polluted.

“The waste water from workshops has killed crops and rice fields. The 10 kilometer section of Nguy Huyen Khe River in Bac Ninh province has become a dead river, where no fish and shrimp can exist,” he said.