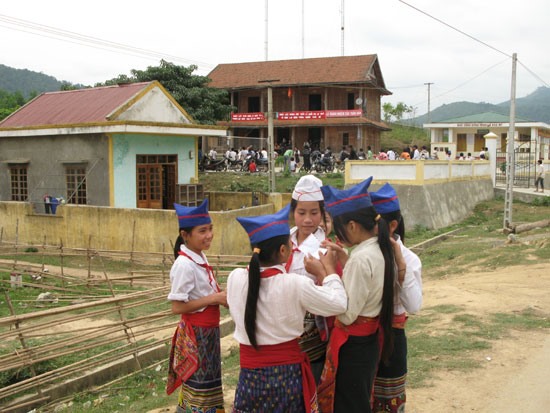 Merely a month after school opened again following the summer break, four ninth graders of the Muong Long Ethnic Minority Boarding School in Kỳ Sơn District informed their homeroom teacher that they would drop out of school to get married. Three girls tied the knot in October while another wedded a few days after the school-opening ceremony.

The class’ homeroom teacher Vi Thi Sam said that she was no longer surprised to see her teenage Mong students quit school and get married so young.
Poor, ethnic students dropped out for many reasons, she said, but the teachers and the school always tried to persuade them to study.

“But girls who stopped going to school to get married, in particular, are the hardest to talk out of the decision,” Sam said.

Efforts by the Muong Long school to protect their students from child marriage achieved little, even when they resorted to forcing the students to swear not to get married before finishing 12th grade. Most girls don’t dare to swear, or they only promised the teachers that they would not marry before finishing ninth grade.

Child marriage is common among Mong ethnicity people as they believe the ages of 13 or 14 are ready for marriage and starting a family. Older girls, aged 16 or 18, will be dubbed “leftovers” by her own village and family if no boys ask for her hand.

The custom, against the law in Vietnamwhich allows marriage from the age of 18, forced several children to drop out of school to get married illegally. Across the mountainous Kỳ Sơn District where a majority of Mong people reside, early marriage was a common reason for dropping out of secondary school in Huoi Tu, My Ly, Na Ngoi and Muong Long communes.

Muong Long People’s Committee Vice Chairman Và Chá Xà said that the rate of child marriage in the commune ranged from five to 10 per cent and showed little signs of decreasing.

“Life post-marriage of most of the newly-weds is difficult as they don’t know how to take care of themselves, let alone a family,” he said.