Catching fish 5 km from the shore of the central city of Da Nang this morning, a fisherman discovered a seal caught in the net. He handed over the animal to the authorities to release it back to the ocean.

VietNamNet Bridge – Catching fish 5 km from the shore of the central city of Da Nang this morning, a fisherman discovered a seal caught in the net. He handed over the animal to the authorities to release it back to the ocean. 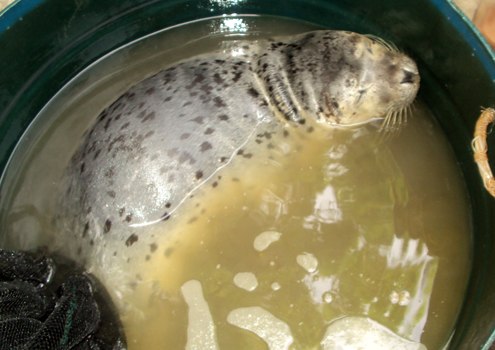 The seal caught in Da Nang this morning.

Xu carefully took the seal on board, put it in a large container and handed over the animal to the Phu Loc Border Station.

Captain Bui Anh Tu, Phu Loc border station’s deputy chief, said this is the first time a seal has been caught in Da Nang. "Mr. Xu’s not-for-profit action is praiseworthy. His net was torn by the seal," Capt. Tu added.