A contemporary dance based on Truyện Kiều (The Tale of Kieu), the masterpiece by the great poet Nguyen Du, will be restaged at the HCM City Opera House on June 22.

The dance is directed by Jung Sun-Goo and choreographed by Chun Yoo-Oh of South Korea. It premiered in HCM City in March last year.

The work recounts the life, trials and tribulations of Thuy Kieu, a beautiful and talented young woman who sacrificed herself to save her father and younger brother from prison.

Kieu sold herself into marriage to a middle-aged man, unaware of his profession as a pimp. He later forced her into prostitution, marking the start of a series of tragic events in her life.

Yen said: “My dancers and I were nervous portraying Kieu. We spent time on researching Kieu and how to express her feeling and pain.”

She also brought staff from South Korea to be in charge of sound and light effects and stage design.

Hung said: “After the premiere last year, we received praise and comments from the audiences. These comments helped us make some changes in expression of feelings, dance language, and visual and sound effects.”

Kieu’s Tale dance will begin at 8 pm at the Opera House, 7 Lam Son Square, in District 1. Tickets are available at the venue. 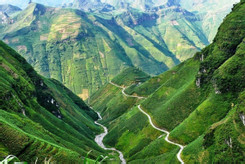