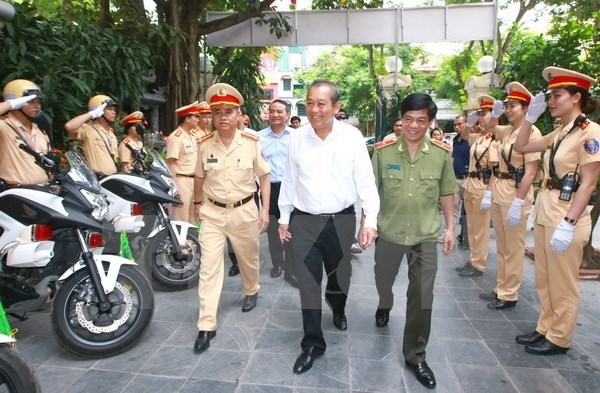 Speaking at a meeting with the Traffic Police Department on May 20 in Hanoi to examine works to ensure security, order and safety for the elections, the Deputy PM urged the agency that inspections, forecasts, and analysis are well performed, towards swiftly rolling out plans to settle any problems that can arise during the event.

While highlighting the significance of the political event, Deputy PM Binh said the public security force and the traffic police force in particular should be the main forces in the work.

He required the Department, the Ministry of Public Security and all traffic officers to firmly handle traffic violations, and effectively deal with illegal motorcycle racing and crimes along routes, especially at the polling stations, thus creating favorable conditions for voters to cast their ballot.

The Traffic Police Department ought to direct traffic police forces across the country to cooperate with the military forces, public security, and the transport sector to do transport instruction well, before, during and after the elections, and prevent traffic jams during the event, he remarked.

He urged the Ministry of Public Security in general and the department to focus every effort to fulfill their duties.

Traffic Police Department Director, Major General Tran Son Ha reported that his agency has assigned detailed duties to its units and those of localities nationwide to actively build plans for safeguarding the elections in accordance with the Plan set by the Ministry of Public Security.

A campaign was launched to ensure traffic safety and social order between April 30-May 31, he added.

The Traffic Police Department directly gave guidelines and intensified its forces, vehicles, weapons, and specialised equipment, and worked closely with traffic police in localities to ensure travel safety and order along National Highway No. 5 (Hanoi-Hai Phong); internal water ways of Ha Long-Hai Phong and Ha Long-Pha Lai, and those in Hanoi and the southern region.

The same day, Deputy PM Binh also had a working session with representatives from Hanoi Police’s Department of Road and Railway Transport, during which he stressed the need to ensure political security and traffic safety and order in the city for the elections and for US President Barack Obama’s upcoming visit to Vietnam.

He asked the agency to effectively implement measures to do the work well, especially in voting areas.