Vietnamese Deputy Prime Minister and Foreign Minister Pham Binh Minh on December 21 held a meeting with President of the Republic of Korea (RoK) Moon Jae-in as part of his three-day visit to the country.

Vietnamese Deputy Prime Minister and Foreign Minister Pham Binh Minh on December 21 held a meeting with President of the Republic of Korea (RoK) Moon Jae-in as part of his three-day visit to the country. 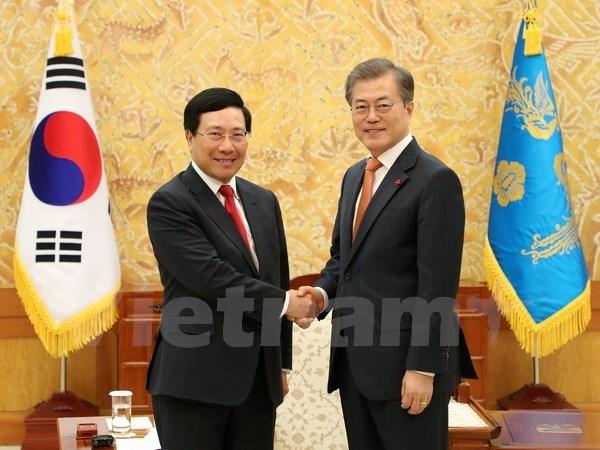 At the meeting, Minh thanked the RoK President for attending and contributing actively to the success of the APEC Economic Leaders’ Week in Da Nang city in November 2017.

He affirmed that the Government of Vietnam treasures and wants to further promote the strategic cooperative partnership with the RoK for the development of both countries and for peace and cooperation in the region and the world.

Moon welcomed Minh’s visit which takes place at a time when Vietnam and the RoK are celebrating the 25th founding anniversary of diplomatic relations, thus deepening the bilateral relationship.

He congratulated Vietnam on successfully hosting the APEC Year 2017, and affirmed that the RoK is always willing to support, cooperate and share experience with Vietnam.

Minh asked Lee and the RoK Government to seek effective measures to balance two-way trade and lift the bilateral trade value to 100 billion USD in 2020, while encouraging RoK businesses to increase investments and take part in infrastructure development, equitisation of State-owned enterprises and restructuring of commercial banks in Vietnam.

He also expressed his hope that the RoK Government supports overseas Vietnamese who are working, living and studying in the RoK.

Lee pledged to direct RoK agencies to increase cooperation with Vietnamese partners to expand cooperation areas in the future.

They agreed to effectively deploy existing cooperation mechanisms and soon organise a strategic dialogue on diplomacy, security and defence at the level of deputy foreign minister.

The two officials also consented to carry out measures to develop bilateral trade in a stable and balance manner, while working closely to conduct the framework agreement on a 1.5 billion USD credit package from the Economic Development Cooperation Fund (EDCF) signed in November 2017 and the credit programme worth 12 billion USD within the financial cooperation between the two nations, and continuing to bolstering cooperation in culture, education, health and people-to-people exchanges.

He also asked for the RoK’s help with bomb and mine clearance, and increasing the reception of Vietnamese workers.

Kang applauded Minh’s proposals and hoped that the Government of Vietnam will create optimal conditions for RoK firms to partake in large projects such as Long Thanh international airport, metro project in Ho Chi Minh City, and North-South Expressway.

He promised that the Foreign Ministry and other agencies of the RoK will continue coordinating closely with Vietnamese counterparts to deploy practical measures to enhance the strategic cooperative partnership between the two countries.

Following the talks, the ministers signed a memorandum of understanding on cooperation between the two ministries of foreign affairs.

On the same day, Minh held a dialogue with leaders of 20 leading groups in the RoK such as Samsung, Hyundai, Lotte, Kumho, Hanwha, Hyosung, LG and Korea Eximbank.

The RoK businesses inquired about Vietnam’s policies and institutions in the fields of investment, trade, tax and banking and suggested Vietnam continue creating favourable conditions for RoK investors to expand production and business operations in Vietnam.

Minh highlighted Vietnam’s investment and business potential for RoK firms and cleared up Vietnam’s policies and regulations in various fields.

He affirmed that the Vietnamese Government will continue offering optimal conditions for RoK investors to do business effectively in the Southeast Asian country.-VNA