The council of Nguyen Phuc’s royal family in Vietnam has written to auction house Millon in France requesting it to cease the auction of a gold seal, also known as the Bao Dai Emperor’s Treasury, and the gold bowl of the Khai Dinh Emperor.

On October 27, the council of Nguyen Phuc’s royal family in Vietnam, a descendant of the Nguyen Dynasty (1802 – 1945), sent a written request to Jean Gauchet, assessor of the Millon auction house, asking for a cancellation of the auction of the above antiques, expected to take place on October 31.

In the written request, the council affirmed that Vietnam, a signatory to UNESCO’s convention in 1970, had sufficient legal capacity to fight against the trading of cultural artifacts since 2005.

Besides, the gold seal is a national treasure passed down from generation to generation under the Nguyen Dynasty for 200 years; therefore, it cannot be auctioned as an item without cultural and historical value.

The request asserted Emperor Bao Dai might have enough wisdom to understand that he was not eligible to transfer the gold seal. However, the auction organizer presented the inheritance certificate certified by the notary public.

“We are researching the legal rights and how the last emperor of Vietnam had transferred the inheritance right as the gold seal and bowl are national treasures,” said the council of Nguyen Phuc’s royal family in the request.

Millon is scheduled to auction the above two antiques at 11 a.m. on October 31, 2022 (Paris time). The starting price of the gold seal under the reign of Emperor Minh Mang will be around EUR 2-3 million, equal to VND48-72 billion. 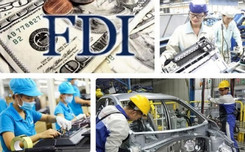 The Ministry of Finance has sent a report to the Prime Minister on the latest financial statement for 2021 of Foreign Direct Investment enterprises in Vietnam. Profits and losses of FDI enterprises have drawn the attention of the public.

Entertainment and cultural events of the week (January 30-February 5)

Developing a high-quality surveillance camera system would help improve the management capacity of authorised agencies at all level throughout HCM City, according to the city’s Department of Information and Communications. Hanoi plans for two cities under its jurisdiction

These urban areas are planned to become the new growth poles of the capital city. The Central Institute for Economic Management (CIEM) under the Ministry of Planning and Investment has sketched out two scenarios for the Vietnamese economy in 2023. 2023 a promising year for Vietnam's tourism

2023 is a promising year for the tourism sector in terms of both tourist arrivals and revenue, according to Chairman of the Vietnam National Administration of Tourism (VNAT) Nguyen Trung Khanh. Vietnam’s consumer price index (CPI) in January edged up by 0.52 % month-on-month, fueled by high consumer demand for the Lunar New Year or Tet which fell in the same month, the General Statistics Office said on January 29.

Co To island a top choice of holidaymakers

With beautiful and pristine beaches, unique “check-in” corners and hospitality of local residents, in recent years, Co To island in the northern province of Quang Ninh has become a top choice for travel lovers.

A number of importers of the United States and the Netherlands have surprisingly sealed sale deals with Vietnamese businesses during the first days of the lunar New Year despite anticipated market difficulty in the year ahead. Vietnam attracted foreign direct investment (FDI) worth 1.69 billion USD as of January 20 this year, down 19.8% annually, according to the General Statistics Office (GSO).