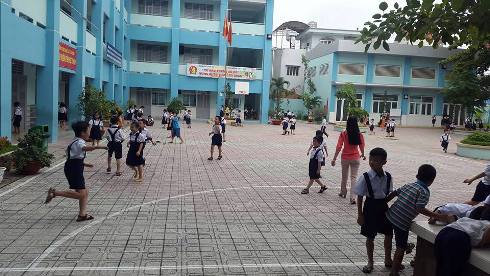 The school’s teachers give extra lessons to students who have finished the 10th and 11th grades and are preparing for the 11th and 12th grades after the summer.

The lessons in literature, math, physics, chemistry and foreign languages are old designs and not used .

Hiep said that teachers only help students review the knowledge they had received in the previous academic year, and they don’t give lessons for the next grades.

Hiep said that the teaching plan in summer holiday was designed a long time ago and the school needs to continue to implement the plan until August 7.

The school will stop extra teaching from the new academic year as requested by the HCMC’s Party Committee and the People’s Committee.

He went on to say that the license for organizing extra classes granted to the school by the HCMC Education and Training Department will be valid until December 27, 2016; therefore, the school will continue running classes in summer as planned.

Giao Duc Viet Nam’s reporters visited the school at 11 am on July 5 and saw students leaving the classes. However, they could not contact the school’s headmaster Huynh Trong Phuc to ask about the classes as Phuc said on the phone he was away on business.

Meanwhile, Le Thi Hong Nhung, headmaster of Le Van Tho Primary School on July 6 confirmed that students were going to school in summer.

However, Nhung said that these must not be called ‘extra classes’, saying that they go to school to have fun and attend entertainment activities.

Though HCMC authorities have officially released the decision on prohibiting schools ‘to provide private tutoring at school’, arguments still continue about the pros and cons of the ban.

The ban has been imposed in an effort to ease the overload on students and minimize the wrongdoings in school environment.

Experts believe that the lessons at school are enough for students and there is no need to go to extra classes which put financial burden on families.

Many parents complain that their children are forced to go to extra classes or they will receive bad marks for school work.