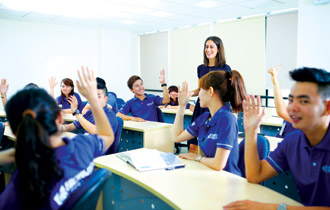 Many international schools have been set up in Vietnam.

Unlike the merger & acquisition (M&A) deals in the real estate and finance sectors, one M&A deal in the education sector in 2013 was made in silence.

This is just one of many deals made recently in which domestic investors bought international education groups from foreign investors.

“When they (foreign investors) run into trouble, this is the right time for domestic investors with deep knowledge in the education sector and strong determination to show up and grab the opportunities,” commented Dr Dam Quang Minh, IAE’s Managing Director.

For the last 10 years, Vietnam has been a promising international education market, where the demand for high-quality education has been increasing not only from the expats here, but from well-off Vietnamese families as well.

A number of education establishments, from kindergartens to general schools, universities to foreign language centers have been mushrooming for the past decade to satisfy the high demand.

However, not many of them have succeeded. Some have failed to attract students, while many investors have postponed their projects when learning of  the difficulties others have encountered.

Thomas Ng, a Viet Kieu (overseas Vietnamese) financial expert, decided to cancel his plan to open an international school after spending $200,000 on a 6-month market survey in HCM City.

Explaining this, he said the market has cooled down. Over the last two years, many Korean, Taiwanese, Japanese, Australian, British and American families, who came to Vietnam for working terms before, have returned to their home countries.

The global economic crisis has prompted international institutions and corporations to cut down on allowances to their staff, including the funding of children’s study in the destination countries.

Meanwhile, the financial expert estimated that he would have to spend $1 million a year on operation costs, management and premises rents.

In principle, the biggest spending sum is pay for teachers and officers, which may amount to 65-70 percent of the total expenses. On average, a foreign teacher expects a salary of $60,000 per annum. This means that an outlay of $1.2 million a year for 20 teachers.

But investors cannot expect such high numbers of Vietnamese students. Decree No. 73, released in 2012, stipulates that the number of Vietnamese students in a foreign-invested primary or secondary education establishment must not exceed10 percent of the total student body. The ratio must not be higher than 20 percent at foreign invested high schools.

Tran Vinh Du, CEO of TNK Capital, a consultancy firm, commented that the new regulation is the “pincer’s jaw” which foreign investors cannot escape. Therefore, he thinks that it is now the right time for Vietnamese investors to come forward and take over the prestigious international education establishments.