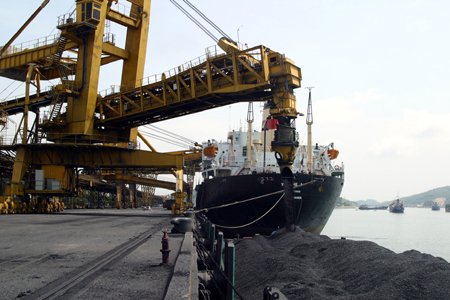 A report from the General Department of Customs (GDC) shows that Vietnam imported 9.7 million tons of coal, worth $600 million in the first eight months of the year.

Russia is the biggest coal supplier for Vietnam, exporting coal at $63 per ton on average. Meanwhile, every ton of coal from China is priced at $71.

Vietnam imported 9.7 million tons of coal in the last eight months, including 1.3 million tons from China. This included fat coal priced at over $120 per ton and anthracite $60 per ton.

Tho said importing coal was unavoidable. Up to 80 percent of imported coal will be used for thermopower plants.

It is expected that Vietnam would import 4 million tons of coal by 2017. The volume will be increasing year after year before it reaches 7 million tons by 2030.

The high ranking official emphasized that importing coal at low prices was necessary because it helps increase supply and ensure national energy security.

However, the problem is that coal imports cause difficulties for domestic coal exploitation.

Nguyen Van Bien, deputy general director of Vinacomin, admitted that the mining group has experienced a difficult period in the last nine months, the ‘toughest time in the last 10 years’.

Vinacomin’s coal output is forecast to decrease by 3 million tons this year compared with 2015.

Tho went on to say that Vietnam will continue exporting coal, mostly high-quality products with high export prices.

“One ton of high-quality coal exports can earn enough to import 2 tons of coal for thermal power generation,” he said.

Amid the large import volume of coal and increased taxes and fees, Vinacomin, the Ministry of Industry and Trade and the Quang Ninh provincial People’s Committee have proposed to the Prime Minister to reduce the natural resources tax.