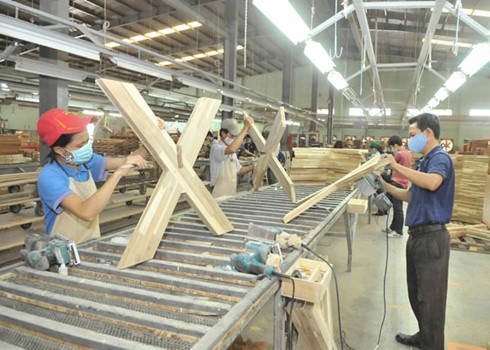 As a result, foreign sector companies from Malaysia, China, Taiwan and Thailand have swooped in and taken control of production in Vietnam and now have at least a 60% market share of all local and export sales.

Hanh noted that compounding the problem is the fact that many Chinese set up ‘straw companies’ in Vietnam hiring a local person to act as the owner on behalf of the true Chinese owners.

So it’s a sure bet the foreign sector actually controls much more of production than what is in the public record and a much larger market share than 60% of revenue, he emphasized.

The forestry and logging segment harvests timber, including felling and hauling it to the mills, while the pulp and paper manufacturing segment produces everything from newsprint and writing paper products to facial tissues.

Other nations, said Hanh, generally have had the upper hand when it came to investing in research and development and adopting the latest technologies, something domestic sector companies had never been committed or able to too.

They should not only have invested more in these areas but should have had more public investment in colleges and universities as well to fund market research, which left them largely out of touch with understanding customer needs and preferences.

Another contributing factor is that the forest industry’s profitability track record has been poor. The domestic sector failed to invest in developing employees’ expertise and skills to increase worker productivity.

In the seven months leading up to August of 2016, total revenues for the forest industry jumped 0.8% on-year to US$3.8 billion, according to official statistics, said Hanh, with in excess of 60% of the revenues going to the foreign sector.

Nguyen Ton Quyen, vice president of the Vietnam Timber and Forest Product Association, has said he believes that the foreign sector controls at least an 80% market share of the local and export forestry market.

Domestic sector companies just aren’t in any position to compete and they woefully have lacked in investment in research and development, marketing, and establishing a distribution network.

Quyen pointed to the fact that 93% of Vietnamese companies in the domestic sector are smallholders and lack adequate funds or access to funds to invest in modern equipment and the like.

To address the situation, the Ministry of Agriculture and Rural Development is working on a legislation that will support these smallholders by providing financing for such things as developing domestic distribution networks and marketing to boost competitiveness.