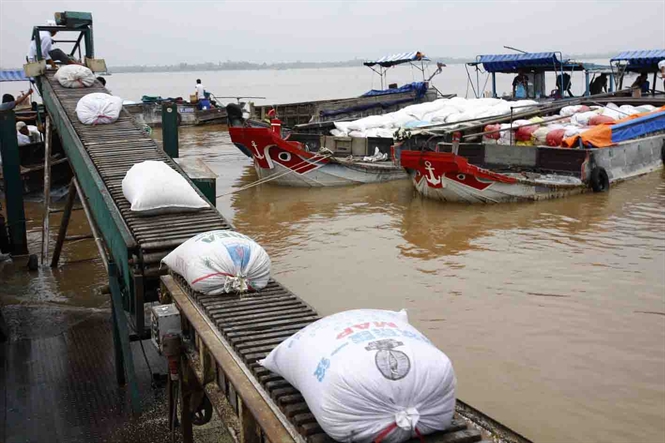 Loc Troi Group saw the rice export in the first three months of the year increasing sharply by 50 percent, compared with the same period last year.

Pham Thanh Tho, a senior executive of Loc Troi, said Loc Troi had signed new contracts with deliveries slated for the second and third quarter of the year.

Other rice exporters have also reported satisfactory business in the first months of 2016.

A report of the General Department of Customs (GDC) showed that Vietnam exported 589,000 tons of rice in March, worth $263.5 million, an increase of 24.1 percent in quantity and 31.5 percent in value compared with February.

As such, in the first three months of the year, Vietnam exported 1.55 million tons, valued at $680 million, which represented 38.1 percent in quantity and 38.5 percent in value compared with the same period last year.

However, rice exporters complained they have suffered from price fluctuations. While the input rice price has been increasing rapidly, the export price has not risen proportionally.

“Vietnam is not the only player in the world market. The rice export prices offered by Thailand and India do not increase because the countries are not affected by drought and saltwater intrusion,” Tho from Loc Troi explained.

“Meanwhile, the decrease in the winter-spring crop’s productivity in Mekong River Delta due to the drought and saline intrusion has pushed the domestic rice price up, thus putting big difficulties for rice export companies,” he said.

Rice experts have also warned that the Thai mass rice sale in May and June would affect Vietnam’s export in the second and third quarters of the year.

In late April, the Thai government announced the plan to sell over 11 million tons of rice in government stockpiles in the biggest ever rice sale campaign in Thai history.

This is the amount of rice left over from the rice-buying scheme applied by the government led by former Thai Prime Minister Yingluck Shinawatra. The program stopped after Prayut Chan-ocha took office as the new Prime Minister.

The Thai new government sold 5 million tons of rice in stockpiles in the time from May 2014 to the end of 2015, mostly to African countries at low prices.

Some rice exporters are not worried about the Thai rice sale, because the rice in stockpiles is old with low quality.