E-payments becoming easier than ever 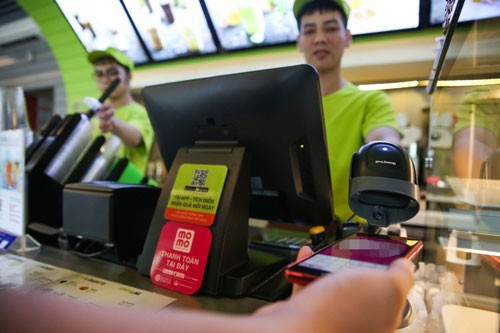 To make payment for goods and services, she opens e-wallets and scan QR codes on her smartphone. Lam can carry out transactions quickly, and save money as e-wallets offer attractive discounts for users.

According to the State Bank of Vietnam’s Payment Department, by the end of the first quarter of 2019, Vietnam ha 18,668 ATMs, and 261,705 POS at office buildings, distribution chains, hotels, healthcare centers and schools.

Sixty five million domestic transactions with bank cards valued at VND171 trillion were carried out in the first quarter of the year. Banks have integrated more features into bank cards, thus allowing payment for goods and services and improving card safety.

Deputy director of the Payment Department Nghiem Thanh Son affirmed that the payment transactions via internet increased significantly by 68.8 percent and 13.4 percent in Q1 2019, in quantity and value, respectively, compared with the same period last year. As for mobile transactions, the value increased by 232.3 percent.

The increase in number of e-payment is attributed to the appearance of new technologies and solutions such as biometric authentication (fingerprint, face recognition), QR code, tokenization), contactless payment and mPOS.

Under the non-cash payment development plan in 2016-2020, the proportion of non-cash payment transactions must be below 10 percent, which means that Vietnam is entering the sprinting period to reach that goal.

Nikkei Asia Review has reported that in the ‘non-cash race’, Vietnam has surpassed Singapore and Malaysia in payments via mobiles phones.

Meanwhile, the survey on global consumer conducted by PwC in 27 countries and territories showed that Vietnam is the fastest growing market in terms of mobile payment in 2018.

The proportion of mobile payment users has soared from 37 percent in 2017 to 61 percent in 2018. The 24 percent growth rate is the most impressive among six Southeast Asian countries surveyed.

Vietnam has favorable conditions to develop non-cash payment, with 55 percent of people using smartphones, and a high growth rate of e-commerce.

The four major groups of players in the mobile payment market are fintechs, banks, mobile network operators and technology firms.

Following the removal of the limit, Vietnam’s central bank said it would only maintain the monthly limit of VND100 million (US$4,284) for each individual.

The Vietnam Chamber of Commerce and Industry has objected to the State Bank of Vietnam’s (SBV’s) proposal that an individual must not conduct transactions worth more than VND20 million per day through e-wallets.