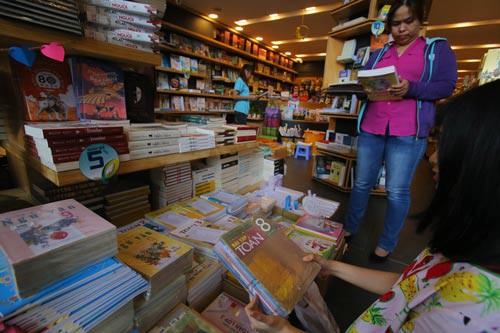 MOET is a textbook compiler


Nha recently said during his trip to Can Tho City that the education reform program is being implemented in a methodical way and reaffirmed the principle of ‘one curriculum, many sets of textbooks’.

At present, the Ministry of Education and Training (MOET) is the only agency which has the right to compile textbooks for general education. However, the monopoly will terminate in the future: all individuals and institutions can compile textbooks if they can satisfy the requirements.


However, experts doubt the monopoly will terminate as Nha promised.

Under Circular 33 dated in 2017 stipulating the standard textbook compilation process, textbook samples must be approved by the Minister of Education and Training before they are put into use.

“Who dares to compete with MOET in compiling textbooks, if MOET not only acts as the compiler, but also has the right to approve the drafts and sign publishing textbooks?” an expert commented.

“It is obvious that letting MOET compile textbooks is not the right way to end the monopoly,” he said.

Hoang Ngoc Vinh, former director of the Professional Education Department under MOET, when drafting Decree 75 guiding the implementation of the 2005 Education Law, said the compilation team wanted to add a provision on book publishing, but it was excluded at the last minute, because it was believed not to be feasible.

“Will there be any private investor who dares to spend tens of billions of dong to compile textbooks, while this is a risky business?” he said. “It would be wonderful if we can have other publishing houses to join the compilation of textbooks. If so, the monopoly will no longer exist.”

To date, questions remain unanswered, such as how to control the market, and how many publishing houses are ready to join the textbook compilation market.

The headmaster of a high school in Cau Giay district in Hanoi said that in order to eliminate the monopoly, Vietnam needs to amend the laws and not allow MOET to compile textbooks.

He went on to say that compiling textbooks must not be the job of a state management agency. The major tasks of MOET are setting up curricula and creating reasonable policies which allow the publishing of low-cost, high-quality textbooks.

It is estimated that if MOET doesn’t compile textbooks, the state budget would save $20 million.
RELATED NEWS