At the scene (Photo: VNA)

The man and his three co-workers were swept into the 260m tunnel by rain-triggered floods while working at the construction site of a hydropower project in Phi Linh village, Si Pa Phin commune at around 6am on July 3. The other three were saved by rescuers later that day.

Over 170 rescuers and five high-capacity pumps have been sent to the site to aid the all-night rescue efforts. The surrounding mountains and prolonged torrential rain have hampered rescue efforts. 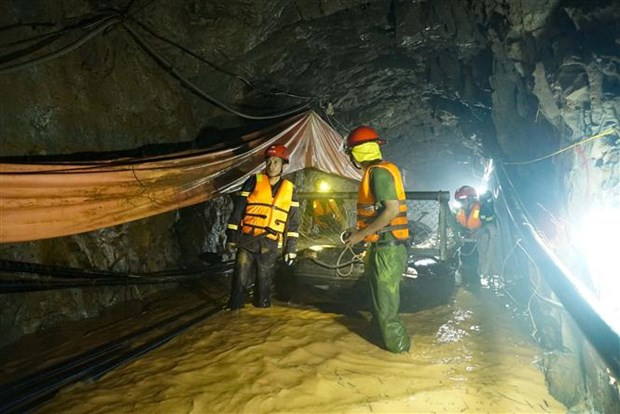 Rescuers striving to save the workers (Photo: VNA)

The rescuers have been racing against time to pump water out of the tunnel in an attempt to reach the trapped worker.

As of noon on July 4, they still had more than 100m to go, said Lieut. Col. Nguyen Van Thuong, deputy chief of the provincial public security department’s fire prevention and rescue division. The volume of water left inside the tunnel was estimated at around 2,000cu.m, he added.

The biggest challenge is that the tunnel is quite long and there is a huge volume of water inside, said Vice Chairman of the district People’s Committee Hang Nhe Ly.

The pumps are running at full capacity and rescue workers are determined to find the victim as soon as possible, Ly emphasised.