Enrollment season begins as parents, students queue up for seats

Preschools, primary and secondary schools will begin enroll students in mid-June. The local education sub-departments and state-owned schools are struggling to arrange seats for students. 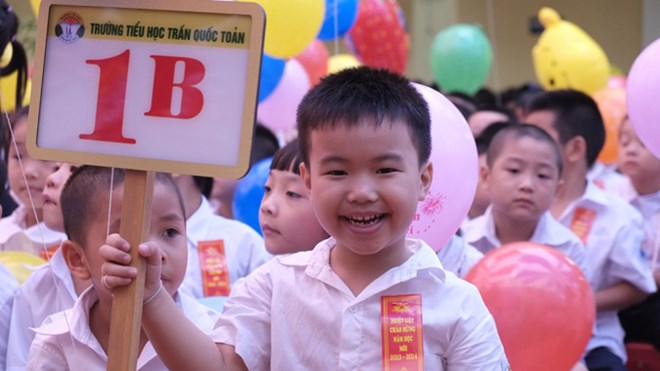 The overloading exists at schools in densely populated areas, where there are many residential quarters, new urban areas and large industrial zones.

Pham Thi Thu Huyen, deputy chair of Thanh Tri district, said the number of children going to preschools this year would be higher by 6,632, while the number of students beginning primary school would increase by 500 compared with last year.

The overloading will be serious at primary schools in some communes in Ta Thanh Oai new urban area.

The Ta Thanh Oai Primary School has only 12 classes for the first grade, while more than 900 children at the age of six have permanent residential books in the locality. If the school receives all 900 students, there would be more than 80 students in every class.

According to Dinh Thi Thu Huong, deputy chair of the Long Bien district People’s Committee, there are 19 secondary schools in the district, including 18 state owned and one privately run.

The number of sixth graders this year is predicted to increase by 1,000 compared with the last year. If noting that there are 41 students in every class, the district would lack 23 classrooms.

As for primary schools, the district would lack five classrooms to accommodate 27,000 students, or 995 students more than last year.

In Thuong Tin district, high schools will be overloaded as anticipated by Le Thi Lieu, deputy chair of the district.

There are 3,214 ninth-graders, who will finish secondary school in summer and will apply for high schools. However, the five state-owned high schools in the locality only have 2,230 seats. A branch of a privately run school and a continuing education center can receive 300 more students.

Lieu complained that while local schools cannot arrange enough seats for local students, they have to receive 300 students from other localities as requested by the city education and training department.

Nguyen Huu Do, director of the Hanoi Education & Training Department, confirmed that the number of seats at state-owned high schools in Hanoi is limited.

It is expected that only 60 percent of students can enroll in state-owned schools, while the other 40 percent will have to go to privately run high schools or vocational schools.

Since the 2016-2017 academic year, Hanoi has been enrolling students online. In the suburban districts of My Duc, Ba Vi and Phu Xuyen, over 80 percent of students submitted online applications. Meanwhile, the proportion is 30 percent in central districts of Hoan Kiem, Ba Dinh and Hai Ba Trung.

A fun way to learn history