These concerts are among the events which are taking place in the framework of the celebration of the 50th anniversary of the establishment of diplomatic relations between Viet Nam and Austria.

In The Flow of Silk

Much like art in general, the flow of silk painting resides within the flow of Vietnamese culture, and every milestone each generation of silk painters achieved is a key element that extends and shapes the flow.
Through the flow of contemporary silk, the exhibition would like to introduce various dedicated artists who are researching and practicing with silk. Having diverse inspirations, reasonings and experimental methods, these artists are still relentlessly pursuing the journey of discovering silk through a personal perspective. Within this exhibition, flowers are the focal figures that help transcribe silk in a different outlook.

Phan Cam Thuong is an influential art and culture researcher, critic, educator, and painter in Vietnam. He is the author of numerous works ranging from scholarly research to folklore. His painting practice is mainly surrounded by poonah paper and silk with natural pigments to create a distinguished shade for his work. Phan Cam Thuong’s painting philosophy is not simply about creating art but always accompanied with cultural ideological elements, especially Eastern culture. He currently lives and works in Hanoi.

Nguyen Van Trinh was born in 1991 and graduated from Vietnam Fine Arts University. Through silk and Giang paper, Trinh researched and experimented with pigments and watercolors in realistic, impressive and surreal expressions to explore the irregularity of art along with each of his emotional fragments in contemporary life. Recently, Trinh has started experimenting with painting silk in water.

Le Phuong Dung brought in two paintings she had composed for some time but have never appeared in any exhibition nor seen by the eyes of the public. She painted oriental objects from the house where she used to live. Her works on silk stand out with neon tones on a dark background in a nostalgic space, creating a negative photo effect. Painter Le Phuong Dung lives and works in Hanoi.

Duong Van Chung is a Nung ethnic painter, educator, graduated from Vietnam Fine Arts University in 2002. Chung’s work reflects the life of people in the Northwest in natural scenery. He uses Chinese ink on silk and cultivates slices of life to create miniature settings in the co-present space. Chung’s silk paintings have strong contrasting shades, with deep blacks, close to woodblock prints. Chung currently lives and works in Thai Nguyen.

Nguyen Ha Phuong composed paintings of young maidens on silk. Perhaps Ha Phuong was naturally gifted with the task of portraying Eastern Asia aesthetics on silk. The artist draws numerous women in scenes such as with Tet flowers, knitting clothes, playing in the garden, etc. Phuong’s silk paintings are vivid, succinct, yet affectionate. Phuong’s art practice focuses on re-perceiving reality by positioning oneself in recollection of past journeys.

Mo Art Space cordially invites art lovers to ‘Agnes’s New Planets’ – a solo showcase by artist Duong Thuy Duong. Where do we come from? How do we define ourselves? Are we the product that we created? These are the questions which Duong Thuy Duong wants, together with the viewers,to try to reflect in this exhibition.

Taking the novel “Immortality” by author Milan Kundera as the point of departure – a story about love, the creator and the world, Duong Thuy Duong began her journey by creating dream images that captivated her soul. From luminous, fluorescent landscapes, disobeying the physical and chemical rules to the constantly changing, redefining of human corporalities and identities, Duong Thuy Duong opens dialogues and expresses her point of view about the paradox of our evolution intertwining with the development of technologies.

Duong Thuy Duong (b. 1989) currently lives and works in Berlin, Germany. Inspired by surrealism and abstraction, Duong Thuy Duong’s paintings refer to the artist’s view of her identity, cultural transfer as well as daily life between two different worlds. Her solo exhibitions include “Nothing is like us” (2022) and “Where is Lucy” (2019) in Berlin, Germany, “My Agnes” at Eight Gallery, Ho Chi Minh City, Vietnam (2016), “Seeing through the window” at Institut Francais, Hanoi, Vietnam (2015), “Seen by others” (2009) and “Coming then leaving” (2006) at Goethe Institute, Hanoi, Vietnam.

Vietnamese artworks through the ages

An exhibition of 152 artworks such as ceramic pieces, art sculptures and paintings that the museum has collected and preserved for the past 35 years.

The ancient artworks are shown in 49 pieces of ceramic with a variety of enamel colours and pattern designs from the 12th to the 20th century. In addition, each item serves a purpose, such as for household usage (wine jugs, tea pots), for religion (censers, incense burners), or for decoration (Nghê statue). Each of them reflects the vitality of ceramic art through the ages.

The modern art artifacts include 103 works of art in sculpture, painting, and sketches, from 1939 to 2021, through notable artists of many generations, which represent a variety of art styles. Featuring over 200 modern and traditional designs of applied fine art works by 138 authors throughout the country.

The works are finalists selected from 538 entries to a competition launched more than four months ago which saw the participation of 183 authors from 25 localities in the country.

“Seeing New(s)” by Phuong Hoang constructs a visual dialogue, combining images from local media and her own photographs with a touch of humour. She questions the importance of delivering messages via pictures in newsrooms when audiences are visually flooded by social media daily. 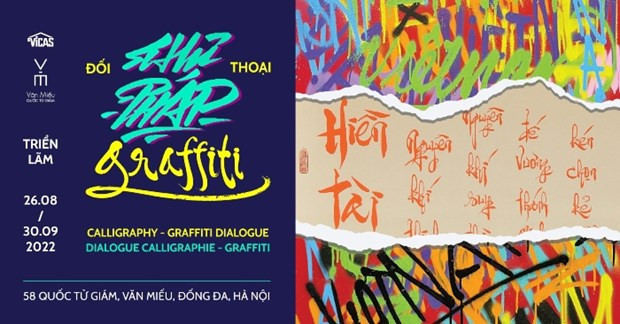 Until Sep 30,
The Temple of Literature, Hanoi

The works are arranged like a story about two people with different personalities and the dialogue which brings them together to empathise and share with each other.

Nguyen Art Foundation (NAF) proudly invites you to the opening of ‘Illuminated Curiosities’, a group exhibition with 26 artists featuring 46 artworks from within and outside NAF’s Collection. Curated by art researcher Ace Le, with the curatorial assistance from Duong Manh Hung and Tam Nguyen, the exhibition will take place simultaneously across the campuses of EMASI Nam Long and EMASI Van Phuc, over the course of six months from May to December of 2022. ‘Illuminated Curiosities’ is a collaborative effort between NAF and Lan Tinh Foundation. 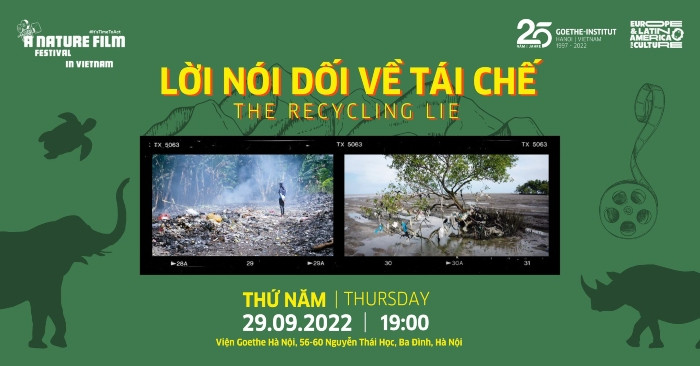 Under the slogan #ITSTIMETOACT- A NATURE FILM FESTIVAL! the first eco film festival will be held from September 23 to October 07, 2022. It is part of the international activities of Climate Week 2022. Tackling the climate crisis is the major challenge of the 21st century. The festival is initiated by the Spanish Embassy of Hanoi in collaboration with European and Latin American Embassies. NGO “WILDACT” helps to publicize and attract audiences. The hybrid festival can be attended online and at the Goethe-Institut and Casa Italia.

“The Recycling lie” will be the German contribution to the Nature Film Festival. The film “The Recycling lie” by Tom Costello and Benedikt Wermter sheds light on an industry that profits from the plastic pollution crisis instead of solving it. Packaging is increasingly being labeled “100% recyclable” to give us a clear conscience. But what happens to our plastic waste after we throw it away? The answer to this question is appalling since only 9% of plastic packaging is recycled1. This raises concerns that recycling is merely greenwashing.

“#It’s Time To Act – A Nature Film Festival in Vietnam”

“#It’s Time To Act – A Nature Film Festival in Vietnam” is the first Nature film showcase featuring international and local environmentally themed films and conversations on sustainability and harmony with Nature in Vietnam.

“#It’s Time To Act – A Nature Film Festival in Vietnam” takes place from September 23rd to October 07th, 2022, against the backdrop of the United Nations General Assembly, joining the framework of international activities during Climate Week 2022 (September 19-25).

“#It’s Time To Act – A Nature Film Festival in Vietnam” is a project part of the EULAT 4 Culture Special call for funding Europe-Latin America cultural relations, with dedicated funding from the Spanish government, initiated by AECID (Spanish Agency for International Cooperation and Development) in the context of its current 2021-2022 presidency of EUNIC. The principal aim of the call was to put into action the Joint statement EUNIC/RIDCULT adopted by EUNIC at the June 2021 General Assembly in Toledo (Spain), with the purpose of fostering the contribution of culture to promoting dialogue, knowledge and exchange between the peoples of Europe and Latin America in diverse global settings.