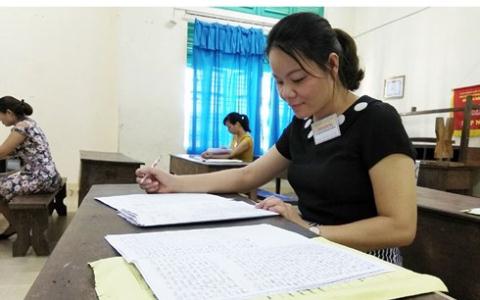 
Local education departments all affirmed that they ‘strictly observed procedures in organizing the national high school final exam’. However, exam cheating on a large scale has been discovered, though it took much time and great effort to discover the fraud.

The inspectors came to the conclusion that 100 percent of the inspected exam papers were correctly marked, and that the scores of the exam papers will remain unchanged compared with the scores informed by the Hoa Binh provincial Education & Training Department on July 11.

Later, following a letter of denunciation, the police and MOET conducted the investigation again and found signs of violations of exam regulations.

The police have arrested two officials of the Hoa Binh provincial education departments - Nguyen Khac Tuan, 37, and Do Manh Tuan, 39. They both have been accused of abusing power to manipulate the exam scores.

Pham Van Hoa, a National Assembly’s deputy from Can Tho, noted that violations have been discovered in every province where inspectors visited.

“There are too many abnormal things found. So I think it is necessary to inspect the exam organization and marking in all localities, not only several provinces,” Hoa said.

The lecturer of a Hanoi-based university said he advocates the idea of inspecting all cities and provinces, though it is costly and time consuming.

“The discovered cheating shows that this is a national problem which must be eliminated,” he commented.

Prior to that, exam score manipulation was also discovered in Ha Giang and Son La as scores of hundreds of students were found far higher than their capabilities and usual results. Five local officials have been arrested so far.

Le Thi Thu Ba, former chair of the National Assembly’s Justice Committee, also thinks that violations in the 2018 high school finals organization happened on a large scale, not only in several mountainous provinces in the north.

“It is necessary to conduct an overall general inspection campaign. At first, local authorities will conduct the inspection. Later, MOET’s inspectors will examine the results,” Ba said.

“Local authorities tend to cover up the mistakes made by their officers. The inspection by MOET will be necessary,” she explained.