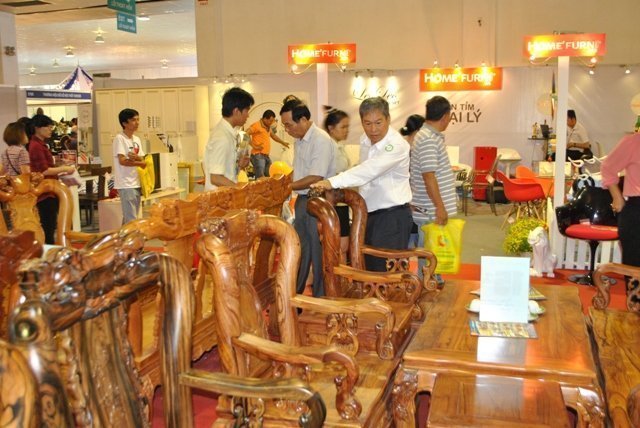 In an attempt to get benefits from Vietnam’s next-generation free trade agreements (FTA), such as EVFTA (the EU-Vietnam FTA) and TPP (Trans Pacific Partnership Agreement), Chinese investors now rush to make investments in wooden furniture projects in Vietnam.

Nguyen Ton Quyen, secretary general of the Timber & Forest Product Association (Vifores), said there aere some 500 foreign invested enterprises in the industry, of which  enterprises from China and Taiwan account for one third.

Meanwhile, Vifores has met many Chinese investors who expressed willingness to invest in the industry to enjoy benefits from Vietnam’s FTAs.

“Chinese exports to the US have very high anti-dumping duties. They want to set up factories in Vietnam to be able to enjoy the tax exemption stipulated in TPP and EVFTA,” he explained.

China exports $12 billion worth of wooden products to the US annually. Vietnam’s figure remains modest at $2 billion, which means that Chinese investors still have great opportunities in the Vietnamese market.

Huynh Van Hanh, deputy chair of the Handicraft and Wood Industry Association of HCM (Hawa), at a working session with the Ministry of Agriculture and Rural Development (MARD) recently, said that Chinese investors have been penetrating Vietnam by buying bankrupt or unprofitable Vietnamese businesses. In many cases, Vietnamese are registered as owners of the companies.

“I discussed the problem with customs officials. They said it is very difficult to control the situation,” Hanh said.

“If the export volume of certain types of products increases sharply, Vietnam may have to face anti-dumping lawsuits,” he said.

“As Vietnam has not been recognized as a market economy, it may even face dual lawsuits – anti-dumping and countervailing,” he continued, emphasizing that this would be a danger to the national economy.

According to MARD, the export value of timber and wooden products reached $3.8 billion in the first seven months of the year, which means just a slight increase of 0.8 percent compared with the same period of 2015.

The unsatisfactory exports of wood chips  and outdoor wooden products were the main reason behind the modest growth rate.

In previous years, Vietnam could export 7.5 million tons of dry wood chips every year, but it could only export 1.8 million tons in the first six months of the year, mostly to China.

Meanwhile, the export of outdoor furniture decreased sharply because of lower demand from the EU caused by Brexit and the immigration crisis.