Tien Giang and Long An provinces, the two biggest dragon fruit producers, held a meeting to discuss solutions to ‘rescue’ dragon fruit on January 27, or the third day of the Lunar New Year. 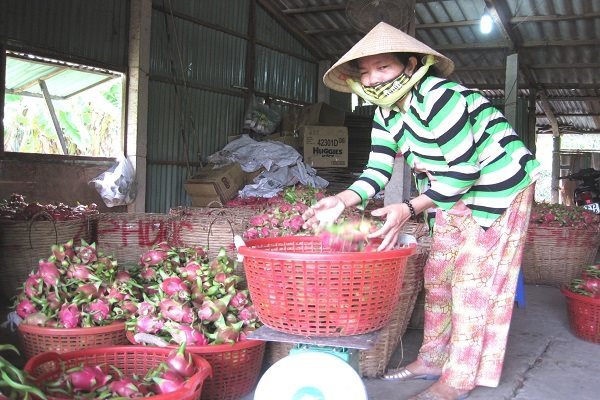 The coronavirus outbreak has caused difficulties for export to China, which consumes 90 percent of Vietnam’s dragon fruit.

At the meeting, all the merchants in the two provinces decided that from January 27 to February 3, they will not collect dragon fruit from farmers as they planned before.

The merchants made the decision because they cannot export products these days. Chinese importers refuse to receive more products because of the new regulations on travel restriction and the closing of some border gates in an effort to stop the spread of the coronavirus.

The merchants also decided to have VND5,000 for every kilogram of dragon fruit to the farmers with whom they signed contracts.

A merchant in Chau Thanh district in Long An province told the press that exporters have canceled contracts with merchants.

She went on to say that before Tet holiday, merchants signed contracts with farmers on collecting dragon fruit at the average price of VND32,000 per kilogram. Meanwhile, as products cannot be exported, the price has fallen to VND5,000.

“All the plans have been canceled. Even the consignments of products on the way to China have also been stopped,” she said.

Not only dragon fruit, but mango and even durian, which still has no license to enter the Chinese market, have also been affected.

“All the doors are closed to Vietnamese farm produce,” she said. “The situation is worrying, because China is the key consumer of Vietnam’s farm produce."

A director of a fruit export company, who asked to be anonymous, admitted that his company haf incurred a loss of VND3 billion as two consignments of products have been refused.

He affirmed that other exporters have also suffered heavily and they have had to cancel all the contracts signed before with farmers.

Regarding the efforts to control coronavirus outbreak, the Pingxiang municipal authorities have closed ports and stoppef the goods customs clearance from January 31 to February 8.

The US wants VN to cut tariff on farm produce

Vietnam needs to learn from experiences from other regiolnal countries and take appropriate measures to protect domestic production, experts say.