In the border area belonging to Dong Thap, a big signs say the trade of smuggled goods and wildlife trafficking is prohibited. However, the trading takes place every day. 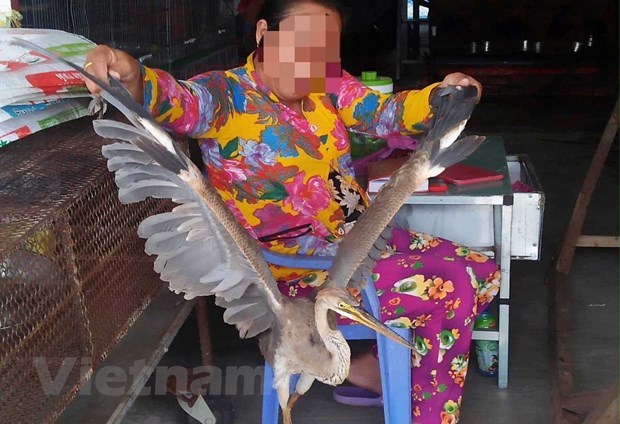 Wild animals listed as endangered in the Red Book are displayed for sale in the open air on roads that link the border areas with the central area of the city.

When a reporter asked a woman if she had wild animals to sell, she nodded her head and affirmed that the animals she sold were ‘authentic’.

On a road section near the border near So Thuong Bridge, reporters could see a bustling wildlife market with many sellers and buyers.

There, birds were seen bound in clusters, piled up on the road. When someone bought the birds, the sellers would pluck them and light them on fire until the meat turned yellow.

Reporters could also see tens of turtles tied and hung on a stake. These included Malayan snail-eating turtle (Malayemys subtrijuga) belonging to IIB Group, i.e the ‘threatened and rare species’ as listed in the Vietnam’s Red Book.

It seemed that the traders in the wildlife market in the So Thuong Bridge area did not care about this. They just thought that they could sell turtles for money.

“Buy and keep turtles as pets. If you want turtle meat, buy big turtles. One kilogram is worth VND500,000,” a woman told reporters.

The woman said that she ‘could provide turtles on demand and in large quantity’. Customers just have to place orders, make payment and wait for deliveries.

Notably, the trading activities of wild birds and red book turtles took place in the open air, just next to a signboard with the words ‘Cong An thi xa Hong Ngu. Tuyen duong co gan camera an ninh (Hong Ngu Town Police. There are CCTVs).

The warning seems to have no significance to sellers and buyers in the market. They still are busy with their purchase and sale. The sellers are willing to take pictures with visitors and wild animals, because of the opportunities for them to advertise their wild animal for free.

Just several kilometers far away, in an area of Hong Ngu farm produce market, reporters could see many turtles in the shop window.
Many bags and iron cages which kept thousands of crocodiles and birds of different kinds were put next to the turtles.

“Why are there so many crocodiles and turtles? Where are they from?” the reporters asked a seller.

“The border and the national parks are near,” he replied.