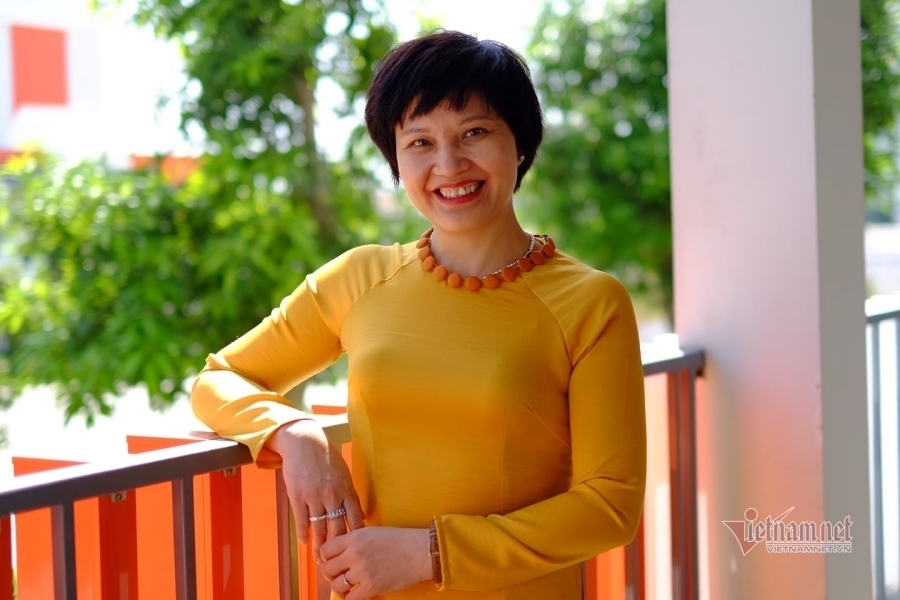 In the 1990s, aquaculture was still not a properly invested industry. Therefore, Huong, who was then a student, cherished the dream of studying aquaculture to find solutions to obtain high yield.

During her four years at university, Huong had chances to go to many areas and she realized that people were raising fish without a specific method.

In 1999-2001, while studying for a master’s degree in aquaculture at Ghent University in Belgium, she spent time on deep studies in ecotoxicology with the focus on assessing the impact of heavy metals on the health of aquatic species and danger to humans.

Ecotoxicology remains an unfamiliar concept in Vietnam which has not received appropriate attention.

“For me, just analyzing the content of toxins in the environment, that’s not saying much, because these are just figures. If we cannot discover the mechanism that has an impact on organisms and through food chains, and how this affects human health, the figures will be insignificant,” she said.

Therefore, in 2002, Huong moved to Germany as a PhD student majoring in Environmental Chemistry and Ecotoxicology at Bayreuth University.

Eight years later, in early 2014, Huong became the manager of a project dealing with dioxin pollution on plants funded by the Vietnam Ministry of Natural Resources and the Environment.

She and her co-workers flew to Bien Hoa Airport, one of the ‘dioxin hotspots’ in Vietnam.

“The images I got when visiting the museums in HCM City urged me to implement the project. I remember that I saw the image of a boy with shining eyes, but his limbs were crippled because of Agent Orange. I thought I had to do something,” she said.

During her years of living and studying overseas, Huong heard about Vetiver, a ‘magic’ grass species used widely in India, Thailand and Australia to prevent erosion and treat earth and water pollution.

Huong and her co-workers then decided to use Vetiver to rehabilitate the dioxin contaminated soil, which was a ‘product’ of the war.

At first, the scientific council believed that plants could not absorb macromolecules including dioxin. The research team then had to cite scientific documents to prove their viewpoint. Dioxin and persistent chemical toxins have very low solubility in water but dissolve easily in fats and oils.

Vetiver has a very high essential oil content in the roots, up to 5 percent of dry weight. This kind of grass can live in harsh environmental conditions. The root system of the plant can be up to 4-5 meters deep.

The research team thought the microbiota living in the root system could play a major role in reducing dioxin pollution.

In 2014-2016, the research team gained encouraging results as it proved that Vetiver could prevent the spread of dioxin to neighboring lands and help ease the contamination level by 38 percent after it grew for 12 months at Bien Hoa Airport.

In late 2017, Huong received funding from USAID to continue studying the mechanism of Vetiver in treating dioxin in the earth and preventing the spread of dioxin.

The project is now in the final stage and new discoveries have been made, and are expected to be reported by the end of 2021.

Huong told reporters that she could gain her achievements because she has a good husband who appreciates her work.

The couple experienced a tough time in Germany, when their income was not high enough to pay their house rent, take care of their child and cover basic needs. Her husband had to wash dishes at restaurants to earn extra money.

Both of them were PhD students at the same school and were very busy. Her husband got home at 8 pm and took care of the child so that she could work at the laboratory until 1-2 am the next morning.

Huong admitted that she sometimes thought of giving up.

“My German teacher was very severe and demanding. I rarely did not cry when meeting him,” she recalled.

But things became better after she redesigned the goals of her research and her plans.

Later returning to Vietnam, Huong began work as a university lecturer at the Faculty of Biotechnology, Chemistry and Environmental Engineering at Phenikaa University, and as a visiting lecturer at the University of Natural Sciences.

She always tells her students that only those who really have passion can pursue the path of scientific research. If someone wants to become rich, they should not become a scientist, she said.

A scientist in southern Vietnam has used her unique skills to help enrich local farmers.