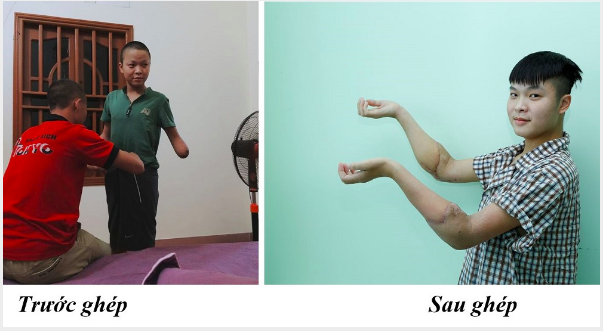 The forearm has been transplanted into a 19-year-old boy

The son of Truong Thi N from Hai Duong province was in a traffic accident in September 2020 and was declared brain dead at the Military Hospital 108. N and her family agreed to donate the son’s organs to save six other patients.

On September 16, 2020, the funeral of N’s son was organized by the Military Hospital 108 with the participation of the relatives of five organ recipients.

Since then, N has kept contact with the five families and updated the information about the health of the recipients.

N has no information how the heart of her son was used and who has been transplanted with the heart.

N is facing criticism that she allegedly sold the heart of the son for VND2 billion. She has become sleepless, and has to use tranquillizers every day.

N has asked for help to look for the patient who received her son’s heart.

“I collapsed when hearing from doctors that they could not save my son’s life. Then I met a female medical worker at the hospital, who talked about the procedure for organ donation,” N recalled.

At first, N refused to donate her son’s organs. But she was later convinced by the daughter, who said the donation would help save the lives of other people.

When agreeing to donate organs, N said she wanted to know the organ recipients and their addresses.

However, N could not get information about the heart recipient from the Vietnam-Germany Friendship Hospital.

Law must be respected

“We always appreciate the noble gesture of donors. However, under current laws, the hospital and surgeons must not provide information about donors and recipients,” explained Prof Tran Binh Giang, director of the hospital.

According to Giang, in other countries, the information about donors and recipients are encrypted to ensure normal lives for organ recipients. The leaking of information may undermine the humanity of the donation.

Giang affirmed that the person receiving the heart is living well.

Regarding the meeting between N and the other five recipients, a leader of the Military Hospital 108 said the families of the people whose lives were saved thanks to the organs voluntarily contacted N to express their gratitude, without assistance from the hospital.

In principle, hospitals must keep information about donors and recipients secret. However, there are exceptions if both sides have specific agreements and both sides are willing to provide information.

Under the laws, even when both the donors and recipients want to meet, hospitals must not come forward and connect them.

Heart transplant patients are emotional, and a psychological shock may seriously affect their health. If bad things occur, the organ donation will no longer have significance.

Prof Mai Hong Bang, Director of the Military Hospital 108, at a meeting with VietNamNet’s reporters on March 23, said that the hospital strictly observed the current regulations on tissue and organ donation and transplantation.

He said on November 7, 2020, N lodged a complaint with the the National Organ Coordination Center, requesting to "implement the commitment on providing the information about the recipient of the heart".

The hospital, after receiving the request from the center to deal with the complaint, met N and her family, explaining the provisions of the laws.

On November 24, N withdrew the complaint. Three days later, the hospital informed the center about the result.

The story has stirred controversy in society and among patients waiting for organ transplantation.

Pham Nguyen Son, Deputy Director of Military Hospital 108, commented that the story has deviated from the original and many people now have a misunderstanding about organ donations, thinking it is trade. But donations must be a humanitarian activity, without any financial claims.

The misunderstanding may make the situation even worse as donation sources are very limited. Many patients could not be saved because of the lack of donated organs.

Thousands of patients need organ transplant operations every year but the number of donors remains small.

He stressed that donors themselves and their families are good people who need to be honored by society.

Son said that there are some problems in the regulations related to tissue and organ donations and the Ministry of Health is joining forces with some agencies to discuss the amendment of the regulations, including ones on medical costs that donors’ families have to pay.