The new world of work

Many young Vietnamese have foregone the 9 to 5 routine and chosen to work in alternative types of employment. 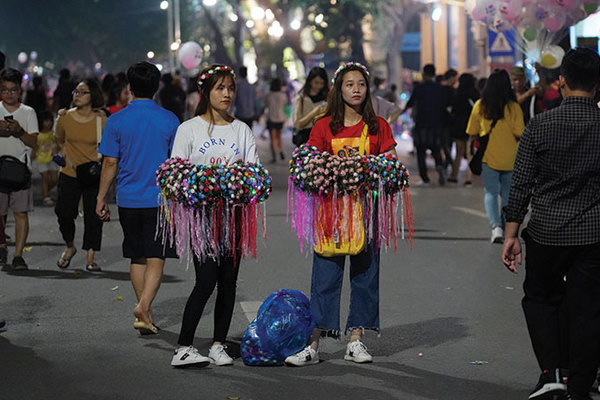 Despite holding a bachelor’s degree from the National University of Civil Engineering, Mr. Khanh Toan works as a driver for ride-hailing and food delivery app Grab.

After struggling to secure employment in his chosen field, he sought out temporary work with Grab in order to pay the bills.

A year on, he has no plans to look for a new job. Good income, flexible time, and a degree of freedom make driving an attractive proposition, and he’s far from alone in thinking so.

Though occasionally seeing employment opportunities in civil engineering, Mr. Toan is reluctant to move away from working as a motorbike-taxi driver. It’s quite an easy job, and anyone with a motorbike and smartphone can find work with ride-hailing apps such as Grab, Go-Viet, and Be. Payment is also made instantly, rather than waiting until the end of the month.

Many other young people have chosen to don the green or red uniforms of Grab and Go-Viet, the two most popular ride hailing services, bringing new blood into an occupation previously regarded as manual work done by middle-aged men with no qualifications.

These young motorbike-taxi drivers are fairly typical of young workers in Vietnam and the world. Nearly half globally prefer part-time work, according to a report released in June by ManpowerGroup, a global corporation providing innovation workforce solutions and services.

Conducted on 18,000 people aged 18-65 in 24 countries and territories that have a large influence globally, the “How We Want To Work” report revealed that about 16 per cent of the 45 per cent preferring not to work full-time chose part-time jobs, followed by contract work and single projects, with 13 per cent and 7 per cent, respectively.

In Vietnam, besides motorbike-taxi driving, other types of work are also available, attracting not only graduates but also intellectuals looking to escape from professional employment.

One of them, 28-year-old Thu Ha, who worked as a website content writer for different companies for five years, quit her job even though she earned VND12 million ($520) a month; higher than the average. After opening an online fashion and cosmetics shop, she now earns some VND20 million ($860) a month.

“The demand for online shopping is high, especially for good quality products from prestigious international brands,” she said.

“It provides opportunities for low-investment business endeavors. It is also competitive, as there are many suppliers, but I have good sources from Germany, Japan, and Thailand, which are favored by Vietnamese shoppers, so I have a stable number of customers.”

Thanks to the development of the internet and technology, not only e-commerce but also freelancing jobs like translation, research evaluation, accounting, graphic design, and software developing are available. Applicants need only click on a screen to take the chance and can work from home.

Along with higher incomes, freedom is another major attraction of not working full-time. Instead of working 9 to 5 every day and, for many, Saturday mornings, these other jobs have flexible schedules, depending on the work and their wishes.

Savings are also higher, as working from home means less transport costs and relief from the stress of navigating traffic, especially during rush hour.

More importantly, they are virtually their own boss so there is less pressure. “I’ve had different bosses over the years,” said Ms. Ha.

“Some were great and inspired me and taught me many things. But others, like the last one I had, gave me a lot stress, with too much work and too much unnecessary intervention. Now, with my own shop, I manage and decide on everything, so I feel more comfortable despite being quite busy.”

Similarly, Mr. Toan said the only person telling him to work harder is himself. When he’s busy with other things, feeling tired, or just not in the mood to work, he only drives for a few hours or turns off the app and takes a break.

“There’s so much freedom and self-control,” he said. “I’ve become used to it now and would find it hard to work to a strict schedule for less money.”

Flexibility, autonomy, and continuous learning opportunities are what workers in these new employment models are seeking, according to the ManpowerGroup report.

They are on the rise and non-traditional forms of employment can allow people to supplement their incomes over the short term while also giving them the freedom to explore different roles and develop in-demand skills. People can control where, when, and how they work, reducing stress and allowing them to find an ideal work-life balance.

For others, non-traditional work also gives them new passions to pursue. For example, with a Master’s in hospitality from the Swiss Hotel Management School and after working for a few years at five-star hotels in Hanoi, 29-year-old Thuy Linh also quit her job.

Though she earned well she just wasn’t happy because she had no passion for it. While questioning herself and her future, she tutored some English classes to pay the bills. She then became interested in tutoring and decided to take a course and earn her qualifications.

“Some people told me that teaching is boring, as the lessons are repeated all the time,” she said. “But that’s not the case. It requires a lot of creativity to have interesting classes. This challenges me to find different ways to teach different students. I like it a lot.”

Ms. Linh’s husband, who hold a bachelor’s degree in Spanish, also works as a freelance music teacher. He turned his passion for music into his main job, after becoming bored with translation work. Both now usually work in the evenings and on weekends and are happy with their lives.

For differing reasons, more and more workers are choosing to forego full-time work. While liking the idea, though, some worry about effect on self-discipline and the lack of social benefits and insurance.

But they are willing to take the risk and are looking for work that allows them to strike the right work-life balance, according to the Manpower Group.

“Obviously, freelancing is not as stable as a full-time job,” Ms. Linh said. “I’ve thought about what would happen if I became sick or something major happened. But I think that passion and happiness at work are very important today, as there is a lot of stress in the modern world. So, I do this and try to save money just in case.”

This new way of work doesn’t affect the quality and quantity of human resources but actually helps increase flexibility, according to some recruiters.

There are tech companies and sales departments at some enterprises that offer employees flexible working times, such as working online or from home, according to Ms. Minh Nguyet, a senior recruiter at

J-Job Recruitment Network, a local head hunter. “These employees have work and a deadline, and the company only manages their work performance,” she told VET.

“This arrangement gives workers a comfortable environment to work under, and most work better. At the same time, the company saves on office space and overheads. But companies need to set up clear key performance indicators (KPIs).”

Manpower Group’s survey also found this is suitable for the development of future work and the gig economy, in which flexible jobs and self-employment are common. It is also suitable to the rapid growth of sectors like production, retail, and services in Vietnam, which require a huge flexible workforce.

According to another Manpower Group survey called “Skills Revolution 4.0”, up to 87 per cent of employees are ready for jobs with high flexibility, such as freelance and part-time work. However, a mere 35 per cent of employers provide what is necessary for such jobs.

So, it’s important that organizations embrace new ways of working to ensure they can attract and retain in-demand skills in an era of talent shortages and skills gaps. They must also maintain a clear and full picture of their workforce across each form of employment, so they are able to make more strategic decisions about growth and the allocation of resources. VN Economic Times

Many university graduates admit that they have had take jobs as workers at factories.v

Soon after a local newspaper published a series of articles on using talented staff in HCMC, the city's Mayor Nguyen Thanh Phong scheduled a working session on the issue.