Since wind and solar power projects cannot provide all the electricity output to the national grid, building an energy storage system is being considered. 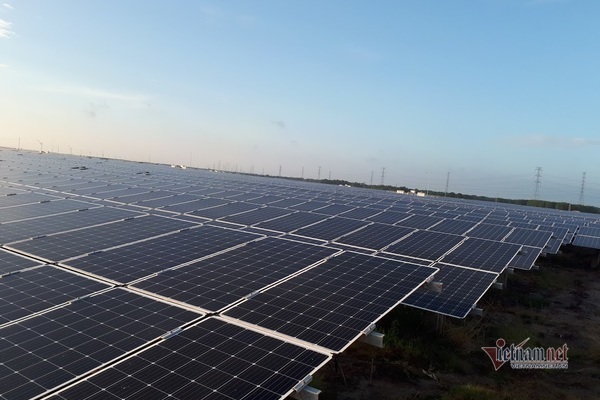 Some solar power developers told VietNamNet that they have had to reduce the capacity by 30-40 percent, and sometimes 50-60 percent. This causes a big loss to investors, hundreds of millions of dong a day.

Solar power plants have to cut the capacity partially because the transmission lines in some localities are overloaded and cannot receive the entire volume of electricity from the plants.

As the electricity demand decreases, the oversupply occurs at some moments of the day, so the national grid doesn’t mobilize all the electricity output from solar and wind power plants.

According to the Electricity of Vietnam (EVN), the total designed capacity of renewable energy sources has reached 21,560 MW. Of this, the real electricity capacity provided to the national grid accounts for 26 percent of load capacity at noon of ordinary days and 61 percent of holidays and weekends.

The proportion of the renewable energy sources is expected to continue rising in the time to come.

That is why EVN recently submitted a report to the Ministry of Industry and Trade (MOIT) about a mechanism to develop energy storage systems in Vietnam.

EVN believes that developing energy storage systems is a necessity, which is also the advice by international consultancy institutions.

EVN has joined forces with GE Energy Consulting to implement the technical assistance project on researching and developing energy storage systems in Vietnam, funded by USTDA.

The consultants said with the low penetration rate of renewable energy, 15 percent in capacity, or 7 percent in output, the investment in storage system won’t bring economic efficiency.

They believe that investment would be effective only if the penetration rate is 15 percent at minimum.

Calculations found that for the purpose of using storage system, to increase the renewable energy release capability, the equivalent operating coefficient of the storage systems energy will be very low, only 1-2 percent, and therefore will not bring efficiency.

Consultants also say that,technically, the development of storage systems to ease the overloading of the transmission network caused by renewable energy sources is just a ‘temporary solution’. The radical solution to the overloading is improving and building new transmission lines.

According to EVN, the investment in energy storage devices for the purpose of easing the overloading of the transmission network won’t bring economic efficiency to EVN, but will only bring efficiency to renewable energy project developers, who suffer losses because of capacity limitation.

EVN and subsidiaries therefore will not make investment in batteries to store energy. The investment, if it is made, will be implemented by renewable energy plants, which are the direct beneficiaries.

EVN has proposed setting up a legal framework and mechanism to allow renewable energy developers to invest.

The energy storage systems will allow solar and wind power project developers to improve the operational efficiency and reduce the capacity they have to cut.

Under the mechanism, the selling prices of the electricity from the storage systems won’t exceed the prices of renewable energy plants.

For the immediate time, EVN has proposed making a pilot investment in a storage system with capacity of 50-100 MWh. The purpose of the investment is adjusting the frequency to validate equipment performance, to assess capabilities, and to accumulate experience in operating storage systems.

This will provide information to EVN to suggest the policies related to the development and operation of energy storage systems in the power system.

The expenses during the investment and trial operation of the storage system will be taken into account as EVN’s electricity production costs, or in accordance with regulations to be determined by appropriate agencies.