Vietnamese engineers register inventions in the US

Nguyen Trung Tien is one of the young and promising engineers of Viettel High Technology Industry Corporation (VHT). He is now an engineer at the Broadband Radio Equipment Research Center under VHT.

For Tien, a telecommunications engineer's job is not merely operating and maintaining ordinary equipment. Instead, he was assigned a greater responsibility: joining a project of special importance to Viettel, which can put the name of Vietnam on the world technology map.

The task of Tien and his team is to optimize eNodeB 4G products manufactured by Viettel. The requirement is that the base stations must be of the same quality as those provided by major suppliers such as Ericsson, Nokia, Huawei and others.

In the telecommunication systems in general and the eNodeB system in particular, the control of power of the receiver is very important because this detail directly affects the quality of the whole system.

There are some solutions provided by device manufacturers such as Nokia, Ericsson, and Huawei which also use this method, but due to the use of wide spectrum in a cell, 4G LTE network is very susceptible to interference between components.

All devices in the network are only initialized to the same initial capacity despite different terrain and environment. This causes control capabilities to fail to meet the operation, and to high interference and poor reception signals. Telecommunications networks are then more susceptible to failure.

Talking about his invention, Tien said the system set up according to this method is capable of correcting and controlling the power of the receiver line, bringing about optimum efficiency when it is compatible with each type of transmission medium, overcoming the disadvantages of devices of the older-versions.

This is the key to solving the problem throughout the optimization process and is also one of the great technology secrets that vendors hold and implement differently, adding VHT to the team of "big vendors" capable of self-optimizing the network made by the equipment they produce.

As for his best memory, Tien said it was not a successful moment but a failed trial.

At that time, Tien’s invention clearly showed superiority in the simulation process, but the results were beyond expectations when it was trialed.

“We had only a month to change and improve or the project would have been canceled. Our team stayed up many nights on the field, to build simulation models and recalculate the parameters. Fortunately, these efforts have led to success,” Tien said.

Spending eight times reviving the files, two years of implementation until getting the patent, Tien said the invention is not merely the time of application and implementation, but the whole process, until products reach customers and receive good feedback, and business efficiency as well.

Tien and his colleagues in their heart want to promote “Make in Vietnam” products. Although Vietnam has been behind the world for a long time, Vietnam can completely do the things that the world has done and even things that no one has done yet.

Vietnam to trial 5G services on a large scale in 2021 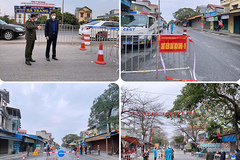