Once foreign invested enterprises (FIEs) are given the right to distribute some important products in the domestic market, a lot of Vietnamese businesses would have to leave the market. However, this would benefit consumers.

VietNamNet Bridge – Once foreign invested enterprises (FIEs) are given the right to distribute some important products in the domestic market, a lot of Vietnamese businesses would have to leave the market. However, this would benefit consumers. 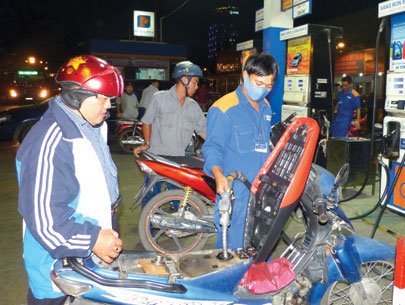 The draft legal document compiled by the Ministry of Industry and Trade says that FIEs would have the right to distribute rice, petroleum and medicine from 2014.

Economists believe that the presence of FIEs in the petroleum distribution market would not have big impacts on the big importers and distributors, who have great advantages, but would affect many other enterprises.

The director of a petroleum import company in HCM City said that foreign energy groups would need only one year to dominate the domestic market. They may accept to take loss for one year, but then would control the market after cementing their positions here.

Also according to the director, Vietnamese consumers can get benefit for one year when buying products at competitive prices from the FIEs. However, later, when Vietnamese distributors leave the market after they get exhausted in the competition, FIEs would easily control the market. If so, consumers would suffer.

In principle, FIEs would be punished if they dump products in the market. However, it would take management agencies at least 1-2 year to find the evidences of the dumping. Meanwhile, the 1-2 years is long enough for FIEs to dominate the domestic market already.

When allowing FIEs to join the rice distribution market, Vietnam would also face the same risk. With the small scale and modest financial capability, Vietnamese enterprises would have to struggle hard with foreigners to survive.

The same thing is happening with the coffee industry. Vietnamese businesses have got worn out in the competition with FIEs to collect materials and export coffee.

The medicine market now witnesses the cutthroat competition between small domestic enterprises and big international groups such as Sanofi, GSK and Novartis.

Input materials now cost 50-80 percent of the cost price in the pharmacy industry. Meanwhile, this is the competitive edge of FIEs over domestic ones.

As offering to buy materials in large quantities, thus enjoying discounts and many other preferences, FIEs always can buy materials at lower prices than smaller enterprises. Especially, FIEs can buy materials from different sources (Europe, the US, Turkey, China, India and Pakistan), which allow to go for the best prices and minimize the reliance on some big partners.

The opportunity for renovation

The FIE’s right to distribute products in Vietnam turns out to not be a big worry in the eyes of economists, who believe that this would benefit consumers and create a fairer playing field.

The economists don’t think that the day when FIEs officially get the distribution rights would be the doomsday for Vietnamese distributors, saying that the State can apply “soft support measures” to domestic enterprises, which do not violate the WTO commitments.

The State can also control FIEs by imposing quotas and requiring certain percentages of domestically sourced petroleum supply in order to restrict the petroleum imports.

Regarding the rice distribution, Vietnam would have the opportunity to approach the investment capital and the technologies from the countries with developed agriculture.