The Ministry of Culture, Sports and Tourism held an award ceremony on December 15 to honour winners of the festival of photos, reportage and documentary films on peoples in the ASEAN Community.

The Ministry of Culture, Sports and Tourism (MCST) held an award ceremony on December 15 to honour winners of the festival of photos, reportage and documentary films on peoples in the ASEAN Community (AC). 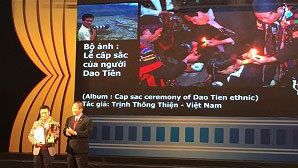 The festival was organised by Vietnam with the participation of ASEAN member countries to welcome the establishment of the AC late this year.

At the award ceremony, MCST Minister Nguyen Bac Son asserted that through the festival Vietnam wants to contribute to building an unified ASEAN Community with identified, diversified and united culture.

In five months after the launch, the organising board received 1,489 photos and photo collections and 113 reportages and documentaries from ASEAN member countries. The works lively reflected daily life and socio-economic and religious achievements of ASEAN nations.