Five-star services for pets in Saigon

VietNamNet Bridge - At the first five-star hotel for pets, dogs and cats are served with imported food, have their hair cut, swim in a swimming pool, do exercise in a gym, and sunbathe.

VietNamNet Bridge - At the first five-star hotel for pets, dogs and cats are served with imported food, have their hair cut, swim in a swimming pool, do exercise in a gym, and sunbathe.

Located on Hoa Lan road in Phu Nhuan District, Ho Chi Minh City is a 5-storey house, the first "5 star" hotel for dogs and cats in the city and in Vietnam. There are about 180 rooms for dogs and cats which are deposited by their owners.

Renting a room here, the pets are served with five-star standard services such as meals "on demand", sunbathing, swimming pool, gym and spa and others and their health is ensured by Japanese doctors. 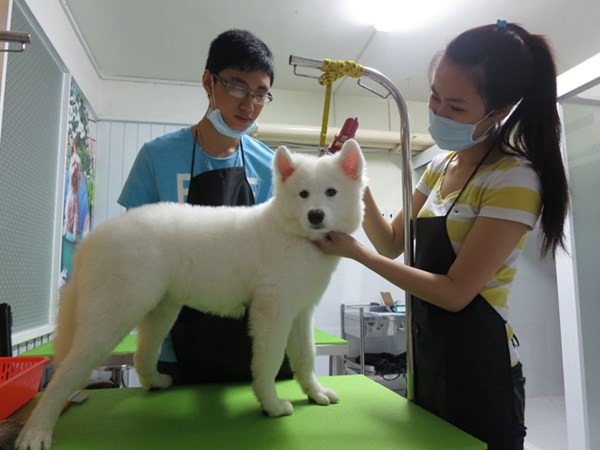 Vets are examining for Samoy.

The dog named Samoy barked when he saw strangers poking their heads in the 10sq.m room where he and five other dogs were bathing.

Samoy was taken here two days ago before its master traveled to the West. They hired a "VIP" room for Samoy, where the dog was taken care of like a "god".

"He was washed and his nails on his paws were cut and polished in red, the favorite color of his owner, and then he had a haircut and his ears were cleaned,” said Ms. Truong Bich Van, director of the hotel and spa for pets.

On the second day, Samoy was examined by a Japanese doctor, who decided that the dog needed cleaning and whitening services for his teeth.

Living in this “hotel," pets are served imported food from France, and meals on demand. After the meal, they take a rest. In the afternoon, they are taken to the street by the hotel staff.

Van said she spent VND18 billion ($900,000) to build the hotel for pets. The idea of building a hotel for animals occurred to her after she saw abused dogs and cats.

"More and more dog and cat meat restaurants have appeared in Vietnam. People see dogs and cats as favorite dishes and abuse them mercilessly,” Van said.

Van said, according to surveys in the Asian market, people spend about $100 billion to buy food and other items as well as services for pets each year. 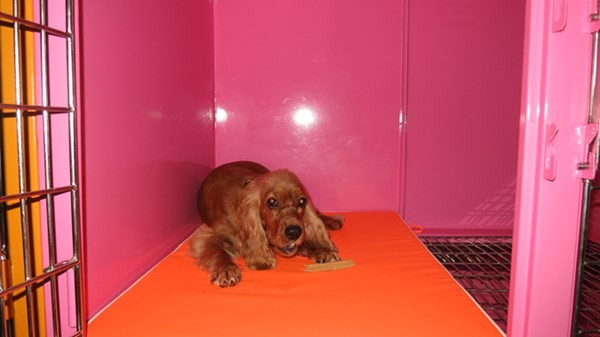 A dog in his hotel room.

In Vietnam, keeping pets is developing as a movement but there is no hotel and spa for them.

Pet care, for Van and 20 doctors and staff here, is like caring for a child. Van said all employees of the hotel must have experience at pet care and must love animals.

Dr. Nguyen Anh Hung said he and his colleagues are on duty 24/7 to make sure that all pets are in best health care.

The hotel has a Japanese doctor who has joined the Vietnamese vets to examine pets daily. For mild diseases, pets are cured at the hotels; otherwise, they will be transferred to the clinic of a Japanese doctor for treatment.

In the hotel, part of the ground floor is designed as a mini supermarket for pets, with food, clothes, beauty tools and pet supplies.